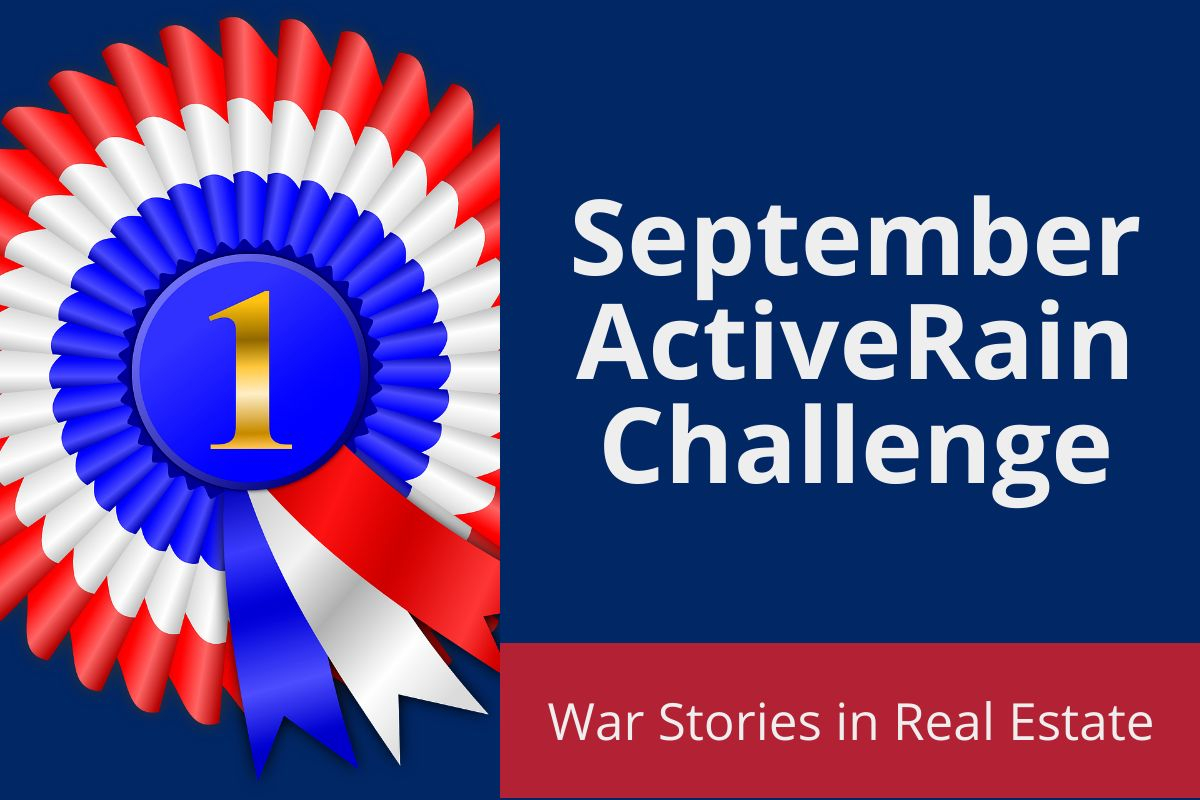 The September contest is first a challenge to try and remember things we have tried to forget and offer them up as a testament to our longevity and character.

The Challenge is hosted by Eileen Burns and Kathy Streib and it is somewhat ironic as we would expect horror stories to be presented in October for Halloween.

I would like to believe that I have had a fun time in my real estate career, ironically my anniversary of licensing will be 19 years in October and I had to really think hard to try and come up with my tales of woe. There was the time when I was going to show a vacant house to a very interested couple. I had checked with the listing agent and was told we could go in at any time as the last tenant was in there 3 months previously.

It was quite a shock when I opened the door, and the first peek offered an image similar to the photo at right. The owner's son let his friend, who couldn't find a place to live because of his 2 dogs, move in and didn't tell anyone. And then there was the buyer and his family that were finally going to get the space they needed, and we were meeting for a last view of a house so we could get a contract started. He shows up with a brand-new car and offered that he just needed to get something appropriate for their new home.

I suggested he call his loan officer to get an updated approval letter and not be surprised if he learned that he no longer qualified. He looked at me as if I had 3 heads and made the call and when he got the news, told his wife and that's when the fan stated throwing stuff all over. There's the first time investor and his wife who were ready to reap the profits from a clean and flip. They found the ideal starter home as it was priced so cheaply, they felt they couldn't go wrong. When I opened the door, I had to step back for the smell.

Top to bottom in mold and good for nothing but a safe demolish and burn, and they still though they could make it work, until they brought over a contractor who refused to go inside.

I've walked into foreclosures where the smell was incredible. No plumbing but someone felt that they had to go, and the tub was the place for them.

Or a closed bedroom door where the sounds coming from the other side left nothing to the imagination. Exit quietly.

The business is fun, and people are all so unique and every new call makes one think about the ride we will be taking.

I enjoyed reading about some of your Real Estate war stories Ed. I'm a dog lover but I must say if your photo example were to greet me at the door, I would close it shut immediately and run!

Loved the war stories, Ed... and I've come across snarling dogs like that, myself, when showing property.

Hello Ed - whether it's real estate or something else, it is interesting to see the battlefield similarities that are encountered.  Thanks for sharing yours.

Love your war stories, this business is challenging and one never knows what is just around the corner or door! Thanks for sharing.

Oh my gosh, Ed...it's a good thing that the good times outweigh the bad!!!  It's hard to imagine what some people will do...like letting someone with two big dogs stay in your hone when it's for sale. Thank you for participating in the challenge.

Ed amazing how people make stupid last minute purchases that send a deal into the toilet.

Good stories all Ed.  Thanks for sharing them.  Enjoy the weekend ahead.  M

WOW!  That mold story is unbelievable!  How someone could let it get that way?  I agree with you, it is a teardown.  YIKES!

BTW - The new car - how frustrating for you.

I haven't been in real estate for as long as you have but I have witnessed a lot of the same things that you have, haha.

Definitely you have seen some crazy things. Great stories, I do think we block out the negative stuff.

Ed Silva thanks for sharing what many of us have experience equally as well.  Love that we can still smile and move along to the next transaction😎

Laughing at your war stories Ed!  You just can't make this stuff up, now can you!!