I enjoyed reading Yesterday's Spy (2022) by British journalist and novelist Tom Bradby and recommend it for your reading list. Click on the links to learn more about this book and the author. 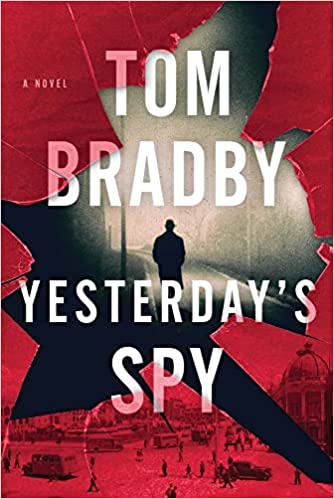 From British journalist and bestselling author, Tom Bradby, Yesterday's Spy is a brilliantly plotted historical espionage novel about a father searching for his disappeared son against the backdrop of the 1953 coup in Tehran.

London, 1953. Harry Towers is a recently retired, and even more recently widowed, British intelligence officer. After a night spent drinking away his sorrows, he is awakened by a phone call with chilling news. His estranged son Sean has gone missing in Tehran after writing a damning article about the involvement of government officials in the opium trade. Harry springs to action, eager to reunite with his son and atone for past wrongs.

When he arrives in Tehran, a city roiling with political dissatisfaction and on the brink of a historic coup, Harry joins forces with Sean's Iranian girlfriend Shahnaz--seemingly the only other person interested in finding the disappeared journalist. Harry's career as a spy soon proves perfect training for this much more personal mission as American, British, Iranian, and French players flit in and out of the scene. But as the first attempt at a coup in the city fails and foreign powers jockey for oil, money, and influence, Sean's disappearance takes on a more sinister tone. Was he really taken in retribution for his reporting, or is this an attempt to silence a globally significant revelation he was preparing to make?

Or, most terrifying of all, does Sean's disappearance have nothing to do with him at all? Has Harry's past caught up to them all?  Goodreads Not quite my kind of book Roy... but it is my husband's kind of book. He knows Iran and Tehran very well and would enjoy this.

Good morning Roy. Your reading machine must be due for an oil change. Wow, what a n envious rate. Enjoy your day.

Hi Roy- this one sounds like a good thriller to me. Harrison Ford could play the lead in this one

Happy Thursday. Great information.  Thank you for the post and sell a house. Bill

Roy Kelley Wow This sounds like another great book - thank you

Sounds a great book, I have been reading some of the Kent Krueger books, which I have enjoyed, will see if the local library has this one available.

Roy, thank you for this book recommendation, and another author I have not heard of.

Yesterday's Spy by Tom Bradby sounds like a great read for fans of spy novels, Roy.