In an earlier post,  I shared with you the backroads, byroads, and main roads of Casa Grande, AZ, just about the halfway point between Phoenix and Tucson.

Today I'd like to take you to Casa Grande, the Indian ruins, in nearby Coolidge.  That was the first thing I realized upon taking the 20 mile trip east from Casa Grande and I-10.  Casa Grande the CITY, was named after the RUINS, and here all this time I'd thought the reverse.

The national monument consists of the ruins of multiple structures.  All were surrounded by a compound wall which was constructed by the people of the Hohokam period, early 13th century.  It's an area you can visit in person. The place was unmanned the day of our visit, but self-guided tours are encouraged. The structure is made of caliche, (deposits of gravel, sand, and mineral nitrates)  and has managed to survive the extreme weather conditions for about seven centuries. The buildings were constructed using traditional adobe processes with the wet adobe thicker at the base.  They build it up using layers of caliche. There is a large house consisting of outer rooms which surround the inner structure, all of which are 3 stories. The inner is 4 stories. I'm not so sure they still let you go inside of it, but we were allowed to at the time. President Harrison actually designated the Casa Grande Ruins in 1892 as the first prehistoric and cultural reserve. I was later designated as a national monument by President Wilson in 1918, whereupon a protective wood roof was constructed.
A newer roof covering was built in 1932 to protect it from the elements. 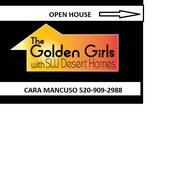 Author Bio: I have been a Realtor since 2005, and love finding homes for new people moving to the area. There is nothing like matching folks up with their hopes and dreams. If you are looking for a new home in the Tucson area, Marana, Oro Valley and Vail area, or wanting to sell your home, I'd love to help.