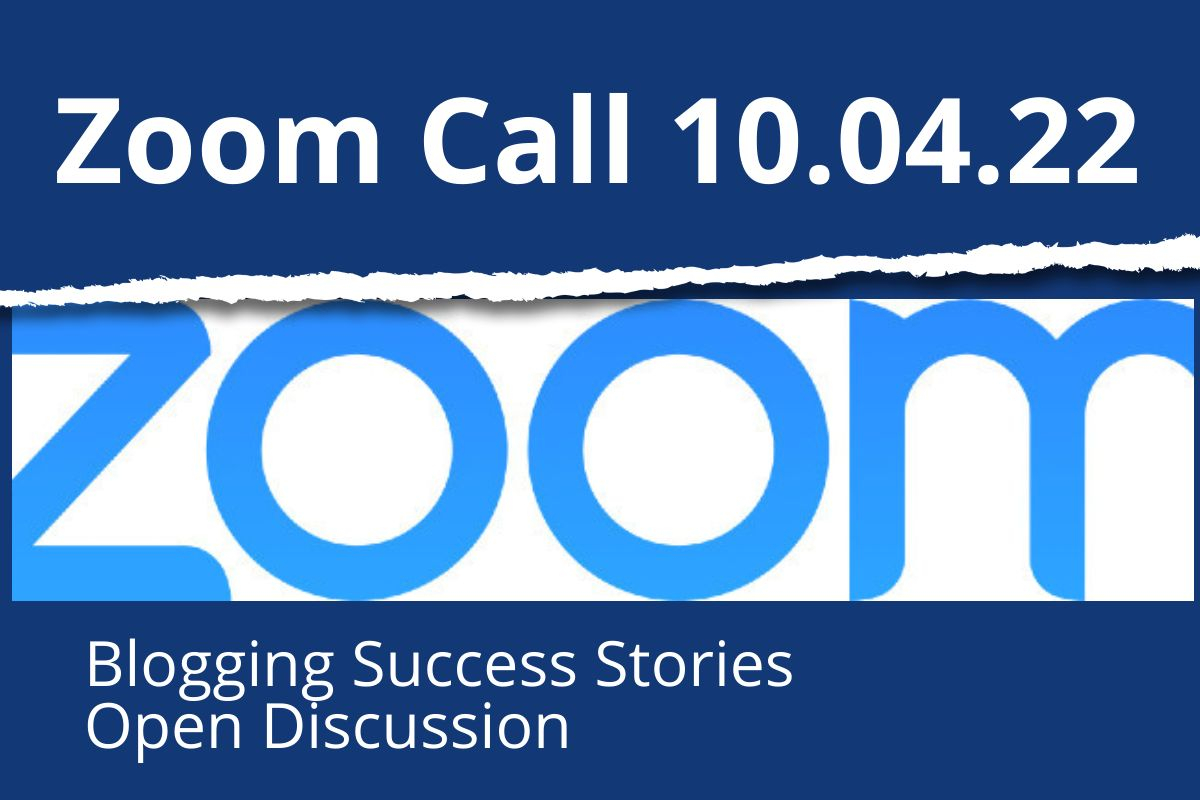 The theme of the Zoom call this week was in line with the October Challenge to offer up our Blogging Success Stories. This Challenge may find more significance with members that have been well before the changes in ownership turned our SEO into chaos. However, there are success stores out there and just maybe a few of the tales from those that spoke may inspire or remind others to take part in the challenge.

Debe Maxwell was the moderator on the call and offered up the floor to all that wanted to participate.

Jeff Dowler started up with his admission that we all have had success in our areas, but not always can we put a label on how it happened.  His story dated back to 2007 and dealt with a family relocating from CT that needed a rental quickly. They found him from a blog post on Carlsbad. The short-term rental turned into a sale and in addition a coworker of that initial client also came to Jeff to purchase a home. That initial client also had Jeff handle the sale of their home as they were moving elsewhere. He feels that the initial post had given him 4 deals and the good will he has with those people will offer more in the future.

Kat Palmiotti offered up a story that wasn't real estate related but showed the power of a well-prepared blogpost. She had broken an ankle and wanted to share her story in a series of posts on getting healthy after her break and how she overcame the problem. She wrote the posts on her outside blog, and it got calls and emails from all over the world with well or 100,000 views.

Margaret Rome recounted a story of getting a call from someone that had listened to her radio show. The had a tale of woe about having a house on market for 6 months and not being able to sell it. They were from Florida and challenged Margaret to get their home sold.  She connected them with Elyse Berman in the Boca Raton area and even though the property was outside her comfort working area, she listed the property. The Sunday after the property was listed, they talked about the listing on her radio show.  Someone listening at a flea market in Florida heard the show and ended up buying that property. This demonstrated that success in blogging doesn't always equate to the posts, so much as the people with whom we interact.

Buzz Mackintosh told a story of blogging about a client that had bought an island in the Potomac River, that was once owned by a now defunct railroad. The island had been sold without getting a clear title and the issues that evolved form that. Another person read the post and wanted Buzz to help them buy another island in the river. One post of a client's issue turned into a positive sale for another.

He also followed up on his recent Zoom call with property rights and the positives that are being done to correct the issues he discussed in the original posts and Zoom call. His calls to action in the posts all turned into a positive to get a bad decision in the area changed.

Kathy Streib spoke of writing a post about an upcoming event, non-real estate related and getting a call from a woman asking about that show. In the course of the call the woman asked what she did, and Kathy explained that she is a home stager. The woman kept her contact information explaining that she may need her help in the future. Shortly after that call, Kathy got a call from another woman that lived nearby, and she explained how she got the contact information from the original woman, which resulted in Kathy getting a staging job.

Hannah Williams discussed getting a call from a person that had read her blog posts and worked for a company that refurbished homes and then gave the to needy people. In the short term nothing came from that call. A few weeks later, Hannah got a call from the woman who explained that she was just getting into the area and wanted to see homes the next day. The criteria was set and they found a condo the next day.

The woman worked for a company that did TV shows on finding homes to refurbish and then give to people. Hannah not only helped them with the find, but when asked if she knew of a deserving person helped with that as well. All from her blog post on the area.

Bill Spears recounted the successes he has been getting from past posts because of the niche he has created for patio homes in a median price value. He acknowledged that he doesn't post current posts on that niche but still gets many a lead from past posts that are still informative.

Emily Medvec told a story of having a listing that was just difficult to sell because of its location that was difficult to reach by car. The post was read by a woman in London and ultimately sold as a result of the blog.

Several others spoke of getting calls just because of being prominent online for their posts, or for the information that was obtained. While some of the calls are from people looking for information on various subjects that would not lead to direct business the reality is people are found from writing good relevant content on their blogs, mostly about the communities they serve and the developments in those areas.

It was such a fun meeting, hearing all the success stories. Great job on the recap.

Hi Ed- Thank you for another great Zoom Recap. We are so lucky to be able to see each other each week and learn as well.

Who would’ve ever thought three years down the road that zoom will still be going strong? Good stuff

Great recap Ed Silva. The group discussion on blog success stories was a true success and lots of fun hearing everyone share their stories.

That was a great recap of our meeting. There are so many other blogging success stories that those of us on the call had but didn't cover, and that everyone else who is/has been active in the blogging world has. Time and effort can pay off.

Hi Ed,
Thank you so much for the recap. I was totally bummed to have to miss this session. I appreciate your round-up.

Such a wonderful group, I miss attending these calls.  I wish my schedule were more open these days and I could attend.

Good morning Ed - thanks for the recap.  I missed Tuesday but I did write my story on Tuesday evening.

This seems like it was a great discussion Ed. I've got my story in draft mode and should finish it up by the weekend.

I look forward to getting back in the calls soon. Business has been crazy, but hopefully, it will be more sane in November.

A good review of the call Ed, well done.

Thank you very much, Ed, for sharing these Zoom session success stories.

Great recap, Ed... and great stories... sure wish I had one that was even close to any of these.

Ed Silva Great recap as always. We had a wonderful time discussing our blogs and stories with each other. I agree with Kathy Streib on how fortunate we are to have been meeting on this Zoom platform for three years. Just goes to show how time flies when you spend it with such fantastic people

We are so lucky to have you and your wonderful ability to recap the AR calls well.  I appreciate it.  I can't make the calls.  I always have enjoyed the ones that I could make during COVID when things were not done in person as much.  So I do miss that interaction.

I agree with Jeff Dowler, CRS.  I ask new clients how they found me, and most just say my presence on the internet.

Great  recap of the zoom meeting.  Good info in it.

Ed thank you for the recap of Tuesday's ZOOM Meeting.  I had to skip off the call, because the Serviceman arrived during the ZOOM Meeting to service my generator.  As important as the ZOOM Meetings are to me, making sure I have a working generator this time of the year is a little more important.  ☺️

As usual a wonderful recap of the Tuesday Zoom meeting. I was bummed I had o miss but was dealing with an offer on my latest listing and we came to terms! They did inspections quickly and came to terms on repairs! It was a good topic and good to see so many particpate.

Wow! Thank you Ed Silva for taking your valuable time to tell this story. Much appreciated and congrats on this feature!

Great re-cap, Ed! Loved that everyone on the call had time to share a success story that was a result of being a member here in the Rain. I've received dozens of referrals from here and sent many to our members as well. I can't imagine having a better pool of agents to send our valued clients to...and to be friends with. The relationships are THE most important thing I think we all carry from here. You've gotta love the Rain!