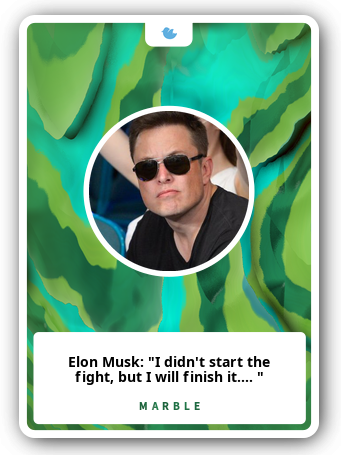 I think personally that Elon Musk is a great salesman and does come up with some creative ideas from time to time along with other great minds that he is wise enough to hire. I dont think he ever intended to buy Twitter, I think he took a stock portion and wanted to get a return on his stock purchase and wanted to see some changes at Twitter but when he tweeted that he was going to take private and at what price he had done the same thing with Tesla previously SEC removed his position within the company as a result.  https://www.nytimes.com/2018/09/29/business/tesla-musk-sec-settlement.html

I had owned a small amount in retirement of Twitter shares before years ago when they hadn't yet turned a profit ever, I looked at them as a stable in social media that wouldn't go anywhere you can turn on ESPN and find # this or that.

I have used Twitter a good bit over the years so not happy to see the gutting of the company by Musk hands which included those that would have direct reporting on safety to the government agencies, this I believe shows the flaws in such a founder running a company that's not really a CEO. I at first thought this was to move the debate up on section 230 about liabilities of whats posted by members on social media and the responsibilities of those post and moderation under freedom of speech. This move is likely I think to bring heavy lawsuits against the company and Musk, you might of heard he went back to some he fired once he found out what it was they actually did and many said no thank you I will take my sever package. I now cant understand how you take over a company and first week fire people before you know their role at the company.

You might have also heard many left when he said plan to work long hours or leave. https://www.bbc.com/news/business-63648505 so they are leaving.

I understand their is a open investigation now to the ties to Saudi government funding of Elons companies including Twitter and if they are provided private direct messages access within the company. https://www.axios.com/2022/10/31/chris-murphy-twitter-elon-musk-saudi-arabia I support this move and I support the investigation of TikTok for security issues. https://www.cnn.com/2022/11/02/tech/fcc-commissioner-tiktok-ban

I have hopes that Elon Musk wont use the personal messages from Twitter to feed his GTP3 openai https://openai.com/ machines which could then be fed for learning purposes via neural network on communications which could lead to https://neuralink.com/ chip implants into humans based on learning from communications and data in part from Twitter, I would say as much as I find Twitter a tool to look up news at a given time in no way would I want it to be used as a data source for history or truth of facts. I hold very little regard for our regulators in the way of regulation on this matter Musk has laid out just how anyone could go ahead and do whatever they want in AI and regulation cant catch up https://www.youtube.com/watch?v=Zdy6m3pvdNE I did watch Elon Musk on the Joe Rogan show and he talked of how he tried to warn anyone that would listen about AI and that it could be used as a weapon only to find no one doing anything about it and he resided himself to a "fatalistic" view this is who is heading the AI movement in large part with OpenAI Neuralink.

Groups:
Addicted to Active Rain
Out Of The Box!
Twitter

The last paragraph is very interesting. As for the twitter debacle, ehh. He doesn't seem  to have thought through his takeover strategy very well, has he?

Yeah the last paragraph thats not a deep fake video, that's his actual words talking about regulators have no chance at this point that's just the way the system is set up to study, then react.

I would agree this takeover of Twitter cant be going how he would imagine, he is selling off Tesla stock which has impacted supply demand causing a decline to boot on that stock price too. I want to see him succeed on his other fronts with the SpaceX satellite, I was disappointed hes moving those out of Ukraine makes it seem like a PR stunt fully now. I want to see the Mars mission via SpaceX and part of the reason I like the file coin $FIL that helps to run the IPFS Inter Planetary Files System with the long term road map of sending data once a day from earth to Mars when settlements begin.