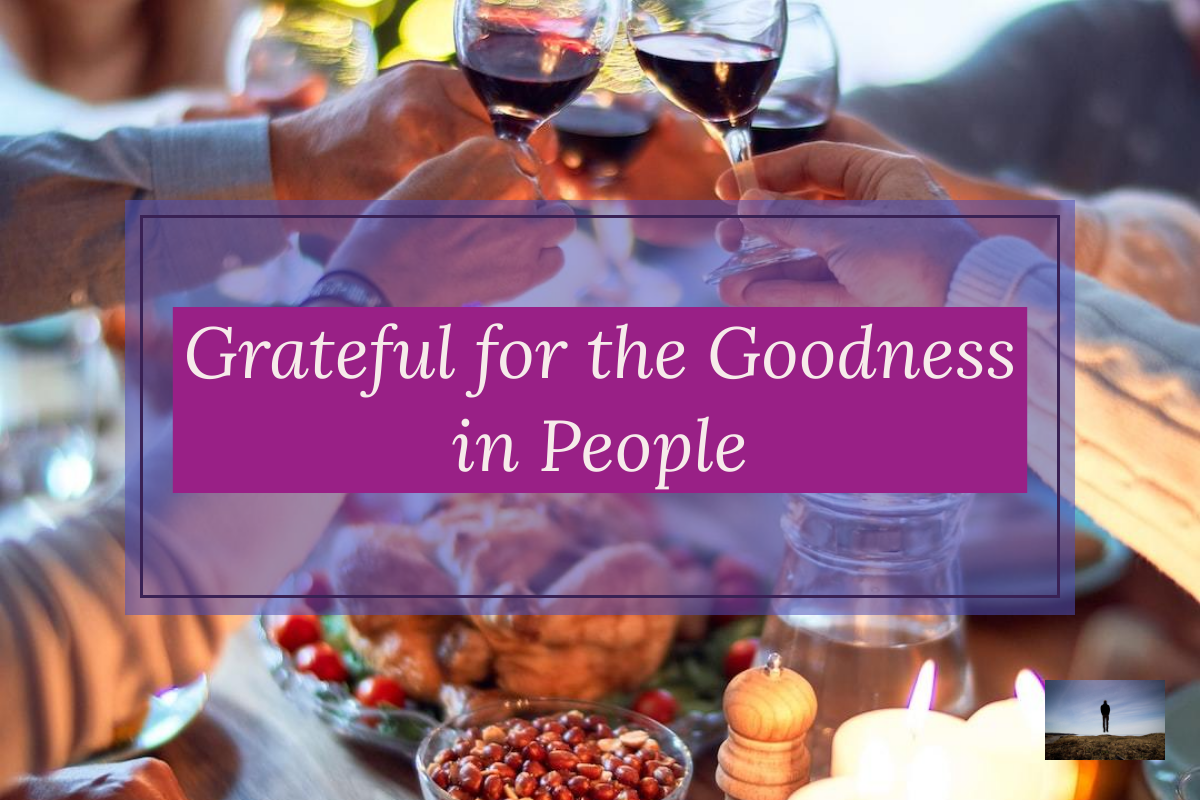 Grateful for the Goodness In People

The news today is made up of bad people doing horrific things. If you read too much of it, you fear for the state of society.

What lifts me up and keeps me from living in a deep funk when every bit of news I hear or read is bad is the belief that people generally have goodness in them. For example, during the World Series,  2 strangers, one an Astros fan, and the other a Phillies fan helped each other get to Houston from Milwaukee on time for the first pitch of Game 1.

On Halloween night, a homeowner who was attending an Astros viewing party left a large bowl of candy for the Trick or Treaters. She’d done this for 10 years without a problem  Her Ring doorbell caught 2 teens taking all of the candy and dumping the bowl on the ground. The third boy (who may have been with the other 2 ) picked up the bowl and put some of his own candy in the bowl.

OK, I’m a sucker for these stories. I believe that the majority of people have goodness in them. Maybe it’s been buried for a while, or perhaps it takes something special to bring it out…but it’s there!

There are people who do bad things or are not nice but I have to believe that if they dug deep down, they would be capable of doing an act of kindness. The inner kindness in people is there and I have faith in it. All we need is to keep our eyes, ears, and hearts open to see it.

Human greatness does not lie in wealth or power, but in character and goodness. People are just people, and all people have faults and shortcomings, but all of us are born with a basic goodness. Anne Frank

This is my fourth entry in the November 2022 Thanksgiving Gratitude Challenge hosted by Debe Maxwell, CRS.

Hello Kathy - I believe the goodness in people is out there.  And when we, as individuals, regularly behave in ways that underscore it, the more of it we "see".

Michael Jacobs well said  When some observe disruptive behavior getting all of the attention- who do they mimic!

Human Kindness is still our strongest trait, we all can still do a better job. Happy Thanksgiving to you and yours.

Bill Salvatore - East Valley so true! It’s something all of us can work on

I too believe the majority of people are goodness within.  Unfortunately due to negative conditioning, bad news sells. And that is very sad.

Leanne Smith for sure! People stop to look at car wrecks, right?

Good morning! I believe most people are kind, or can be kind. I'm not sure everyone can.

Kat Palmiotti I agree...there are some people who have no goodness within them...pure evil.

Loved the Halloween bowl story, Kathy. I'm a sucker for stories like this, myself. And like you I believe more people are good and kind than not.

Nina Hollander, Broker if we didn't believe in the goodness in people...life would be miserable.

Look for the good Kathy Streib . Good advice, healthy reminder. Never give up on a person and consider what could be happening in their life that you and I have no idea about that overwhelms them. Be a helper.

Andrew Mooers | 207.532.6573 I so agree!!!  There was someone I knew many years ago who could be spoiled and many did not care for her. But when  I saw how much she cared for all children, I knew that there was good in her.

Happy Tuesday Morning. You have a lot of comments. Have a great Vacation this week. Hi Eric Bouler And I always am happy to see you here.

There are still a lot of good people in the world and I try to find those people while staying away from the others, haha.

Kathy, those "little things" mean so much to people.   Yesterday at the Orlando airport, and older woman did a face plant, and many of us rushed to help her up and ensure she was ok.

Joan Cox oh no!!! Hope she is ok and yes, thank you..that is exactly what I'm talking about.

I continue to be inspired by the angels that walk among us.  It helps ease the pain of so much chaos going on in lives.

Myrl Jeffcoat were it not for them, I can't imagine what life would be like.

Thank you Myrl Jeffcoat for the feature in your group.

Obviously, not saying the world does not have bad people, but the good folks really outnumber them.

How sweet was it to read about that trick or treater filling the bowl with their own candy. I really like that story Kathy!

Ed Silva this is so true. Some times doing something good or kind for them may inspire them.

You are so spot on about the news and social media.  Unfortunately it is the bad news that catches our attention as humans, and it is what sells advertising for news.  Good post Kathy.  M

Thank you Mark Don McInnes, Sandpoint-Idaho Your Flag posts are like sharing the good that's out there!!!

Kathy unfortunately bad news sells so that is what is reported.  But there are FAR more  good people than bad people.

George Souto And since bad news sells, the media keeps digging up more of it.

I like your outlook on humanity! And thanks for sharing the beautiful quote from Anne Frank

Thank you Lise Howe After grad school, I did some psychological testing. Some of them were recent parolees. I remember one who'd been in for murder. Speaking with him, I could see that there was good in him.

One can find goodness in people where ever you look for it.  I am lucky to have wonderful neighbors.  We look out for each other.

Sheri Sperry - MCNE® I love being able to walk down the street or the park here and see people who are happy and smiling...and willing to help.

I'm in agreement with Ed Silva - it's there, but for some, it takes a little push to bring kindness to the surface! I will say that my least favorite thing to see in someone is 'fake nice.' I'd so much rather see their true self than to show the world they're something that they really are not.

Like you, I'm all about making people feel good and showing them every ounce of kindness I can. For me, life is just better that way!

Thanks for all of your gratitude posts, Kathy - they were all positively wonderful! And, if I haven't thanked you lately, thank you for being YOU. You are such an integral part of this AR family and I'm so thankful for you in my life!

Kathy Streib I am lucky to also live in a wonderful community where people help each other and treat each other as family.  People are kind perhaps they are taught to be unkind