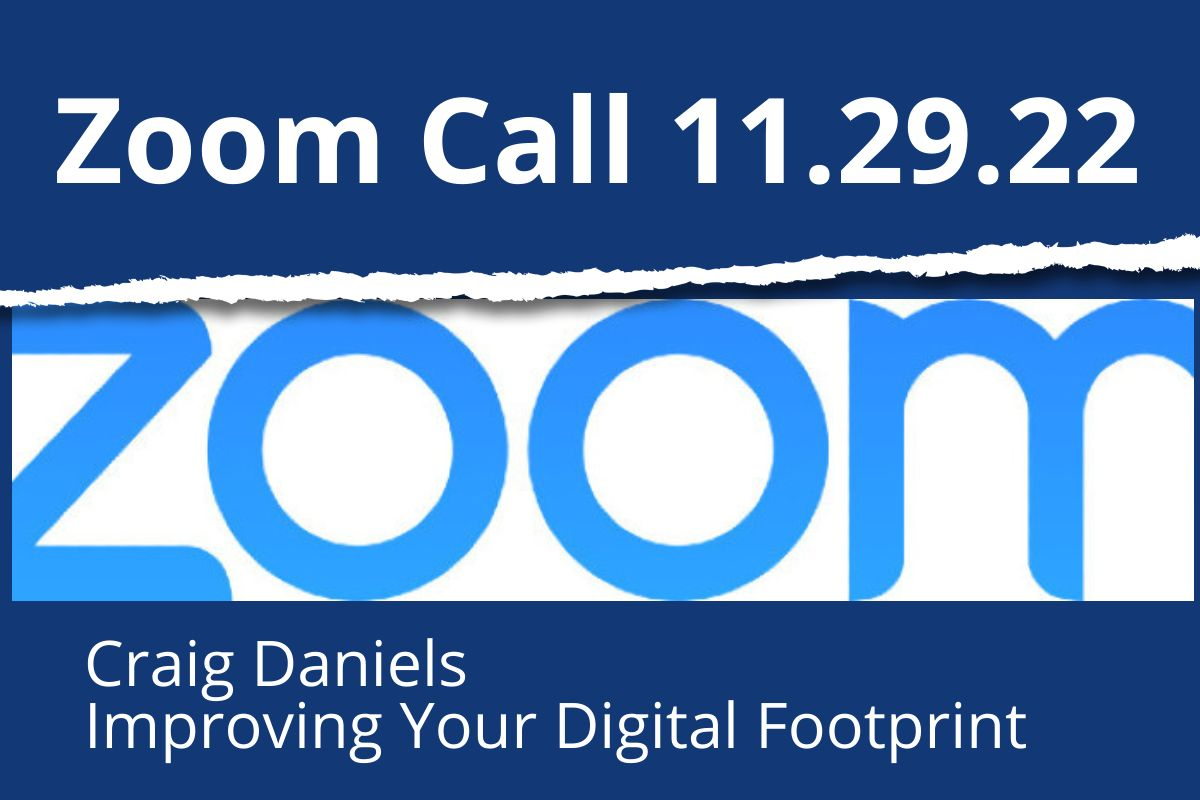 The Zoom call of 11.29 was another fine presentation by AR member Craig Daniels. It wasn't his first call and hopefully it won't be his last.

By way of offering imagery that was very basic, he showed dinosaur tracks that would be best appreciated by any paleontologist. He then showed tracks that were under water for years and were far larger and better defined. His efforts were to show, that while both sets of tracks can be appealing, the larger, better-defined set of tracks needed less effort to be appreciated. This was the starting point of his presentation that being easier to find should bring better results. What would people find in seeking our digital footprint?

Does our individual Internet presence carry a deep and distinct, impressive profile, with high clarity?

To better emphasize his presentation, he offered up several AR members, who coincidently were on the call, to exemplify effective marketing on how to be found on the Internet. He discussed how an agent can be found first from a for sale sign which would prompt a potential seller or buyer to research them online.

Or maybe from a postcard, referral or even an acquaintance who offered up a name when real estate came into the discussion. Any of these would become a reason to seek out an agent online, and that's where their footprints need to be deep. We all work, hopefully, to rank high on a search page. Google looks for Expertise, Authoritativeness, and Trustworthiness.

The call was then focused on the footprints left by members that Craig had researched to use as examples of patterns people might use to get their E-A-T. He did a search for Kat Palmiotti

This was to find her E-A-T which showed her presence quite promptly and across all the spectrums that she uses to self-promote and market herself.

Top of the page was her website, which demonstrates her efforts to be seen. The search showed her Linked in work, her YouTube channel, Instagram, and ActiveRain.

Craig did similar for several other members that he presumed would be on the call based on previous calls. For each he called out the work done as well as the work that could be done to increase their individual E-A-T.

There was time spent on the importance of YouTube in our marketing and how it gets noticed by Google as well to rank higher on a search. Using his own name, he demonstrated how sometimes a name alone may not be sufficient to be found.

When he entered his name into a search, he was also sharing space with that other debonair person, Daniel Craig, 007.

To this end, he offered that if we are not so uniquely named, it might be better to often use our realtor or broker near our names so they will be associated and found easier.  Although if someone were to call our Craig and offer him a movie opportunity, would he say no?

When Craig used my web presences as an example, he found several websites with my name. There was my presence on my office website, as well as the in process new website I am getting completed while still not dropping the old site. All showed up, however, they need to be cleaned up to allow for a better Google presence along with completing a Google Business page.  In this case, I served as a good example of a web presence that needs work, but still had features that would allow me to be found and even recognized as a person that serves his clients well through the testimonials.

Testimonials can greatly help our web presence and they should be used where they would do the best good. If a client is willing to offer a testimonial sending them a link to your referred site may help.

If after seeing the testimonial, it may be helpful to offer subtle suggestions yet not offend the author of that testimonial. As Google is such a powerful presence on the Internet, he strongly suggested getting a Google my Business page and use it frequently. The page is free and would get indexed along with the rest of the sites that we use.

In the photo above for Kat, the GMB marketed on the right is here business page. Our ActiveRain profile age offers us a way to control our exposure ad be as specific as we choose.

Also, posting a blog on ActiveRain 'About Me" allows us to get as detailed as we choose and if a reader wishes to further appreciate who we are this is an ideal way without wasting someone's time that doesn't want to read it. Links to this page can be placed in our marketing as well.

Again, using Kat Palmiotti as an example, since he had worked with her, he showed the stats for her About me post, which had almost 3,500 views. in only 10 months. Obviously not all had come from ActiveRain members, so it showed that by her using that page in her other marketing it was drawing attention to her.

How to Pick our SEO topics Getting attention to our self can be done best by posting meaningful information but also by having a title that will get the attention we want it to get.

Craig spent time using a Keyword tool he felt was not only useful but also not costly.  It can be used on Chrome and Firefox and is more economical than AdWords.

He spent time demonstrating how a title search can get its best exposure by merely typing in a partial title and seeing the tool complete it with text that would be most commonly used. It can then be completed to allow for our own areas best. He recommended using Keyword tool as it was only $10/yr to use and allowed for a lot of use. It was another very informative call by Craig Daniels, which was ended after an hour as he had to go meet his kids at the school bus, otherwise he had enough knowledge to take us through to dinner.

As an added bonus he offered to send all on the call a copy of his slides, which were also quite detailed and only partially shown here

This was a very productive call and for those that have been on ActiveRain for a while was very representative of the early webinars that were offered to educate us on best blogging techniques.

The blog schedule is offered weekly by Carol Williams and Kathy Streib on their featured blogs, as well as the meeting notice by George Souto weekly

Groups:
Almost Anything Goes
Bananatude
The Art Of Marketing You
Old Farts Club

Thanks Ed. That's a good summary write up. One of the points I was making is when we have "name competition" (e.g. maybe they'll call me for the next movie?). If people search for us just by name and they aren't getting the results they want then they have to add more words to their search. In your case a basketball coach, etc. So then what do they type? Either your location or your business type. If they do "Ed Silva Realtor" your edsilvactrealtor.com (older) website comes up to the top. Your new site is terrific but is edsilvactrealestate.com - Perhaps in the body of the text for that new site you should make sure both your name is shown frequently along with the text Realtor so google can pair that up and find the site you want them to land on.

Thank you for the hint

Hi Ed - the last two weeks have been so crazy for me.  I really wish I had seen Kat Palmiotti and Craig Daniels presentations.

What a great write up as always..  Craig Daniels gave an excellent presentation as always! He is so knowledgeable and can really explain things so we can understand. Now just time to implement a third of what he talked about. One thing at a time!

Great recap! Craig is so knowledgeable and I was so looking forward to being there but something personal came up at the last minute. I've book marked this for rereading and further action.

Thanks for the write up as usual Ed. I wish I was on that Zoom session with Craig Daniels as would have liked to get his slides. Jeff

Are usually have to switch things up every once in a while to keep up with SEO, so this only makes a lot of sense

That was an excellent write-up and a very informative overview by Craig. I signed up for the keyword tool (although I don't think I paid anything yet so maybe I have the free version) and I hope to do some exploring this weekend. I always learn something (and sometimes lots of somethings) from Craig's calls.

Craig Daniels is amazing!  I have learned so many things from him over the years and he is always willing to help people out.  I should have written a gratitude post about him since I truly am grateful for all that he does for us in the Rain!!!

Good morning, Ed... thanks for this great recap. I had had every intention of attending and then had to change my Tuesday schedule to accommodate an out of town client.

wish these were recorded.  Some I hate to miss, but life is busy.

I am certain all who were able to attend Tuesday's Zoom session benefitted from doing so, Ed.

Ed this was another excellent presentation by Craig, and he could have easily have gone on for another hour.

Hi Ed- thank you for recapping the weekly Zoom meetings. And it goes without saying that Craig Daniels is always so helpful to all of us here. Thank you both.

Craig was awesome as usual with all the nuggets that were dropped throughout the entire hour.  I hope that we can talk Craig into a regular 'residence' on the Tuesday Zoom call to get more of the knowledge rattling around in his head!

Great recap Ed! The last few Tuesday's have been busy ones and bummed I missed this one. Looks like it was packed full of great info !

Thanks for sharing the re-cap!!! Craig Daniels thank you so much for sharing your wisdom.

Hi Ed,
I so appreciate this recap. I missed the Tuesday Zoom as I was zooming down the road toward Yuma, AZ. I hope to be at the next one.  Have a wonderful weekend.

I can't get to these calls since business got back to normal, and we have started having office meetings on Tuesdays.  I am glad you always provide a detailed post about what was discussed.  Thank you for your efforts.  I would like to have been on this call.

Being on honeymoon, I missed this, but thank you for a wonderful recap. Definitely some homework to be done and changes made. 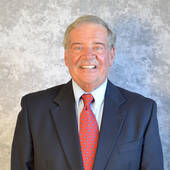