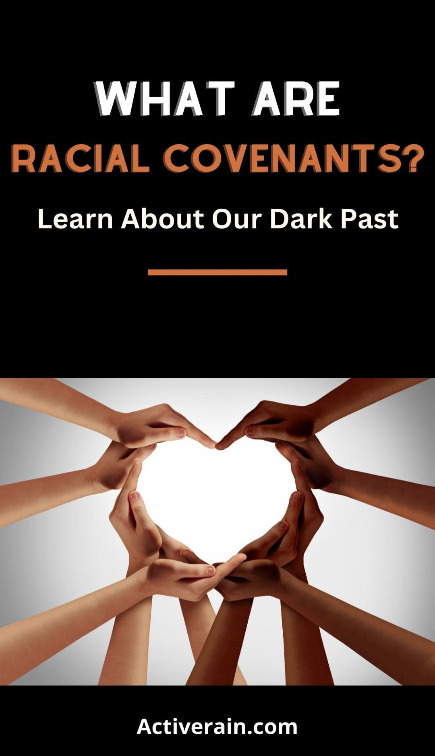 What to Know About Racial Covenants

Without a doubt , we have a dark past. To learn what went on many years ago in our country is disgusting. Many had hate in their hearts. Since then we have come a long way, but racism certainly still exists.

After doing research on house covenants, I learned quite a bit about racism in the real estate sector.

Have you ever heard about racial covenants? If you're thinking no, I'm not surprised. I would be in the same camp until just recently.

For the thirty six years I've practiced real estate, restrictive covenants were always assumed to be more about property than the human race. Little did I know there was also a seedy underbelly waiting to be discovered.

We are going to look at the general meaning of house covenants, along with a detailed look at racially restrictive covenants.

You may be surprised what you learn here.

What is a Restrictive Covenant?

In real estate law, land-related covenants are referred to as real covenants, conditions, and restrictions (CCRs). They can also be called deed restrictions.

Property covenants may also run with the land (referred to as a covenant appurtenant). This means that future landowners must abide by the terms set forth in the covenant.

Covenants, conditions, and restrictions (CC&Rs) are rules that control what property owners can do within a community. The original developer usually creates CC&Rs for the community.

The intention of having covenants, conditions, and restrictions is to protect the property values of those living in the community.

Restrictive covenants are almost always found when a homeowners association exists but they can also be present when there is no HOA.

What Are Racially Restrictive Covenants?

A racial covenant is a type of agreement that was used to limit the sale, rental, or occupancy of housing to people of a certain racial or ethnic group.

In the last century it was commonplace for white people to put language into real estate deeds that prevented other races and ethnic groups from purchasing property within particular neighborhoods.

These racial clauses inserted into property deeds prevented black families, Jewish decent, and oriental families from owning in many places.

Racial covenants to this day can be found in property records across the United States.

These racially motivated covenants were legally-enforceable contracts that stipulated the property had to remain in the hands of White people. They ran with the land, which meant they could be enforced in perpetuity.

Anyone who dared to challenge this ban risked losing their claim to the property.

There were a significant amount of properties that had racial covenants preventing sale to non-white people.

While such covenants would target several different racial groups, they were primarily used to keep black people from buying property. The discrimination was based on the notion that black people would decrease the value of the property.

The Dark Origins of Racial Covenants

Racial covenants were created by the real estate industry at the beginning of the 20th century in order to reshape the urban landscape.

Working together to improve the environment of rapidly growing cities, they promoted parks, playgrounds, gardens, zoning and land usage. It helped map out areas separated by residential vs industrial uses.

At the heart of this planning was white supremacy. There were strong beliefs that mixed-race residential neighborhoods were detrimental is should be abolished.

The National Association of Realtors Were Involved

More shocking to me than anything else was The National Association of Realtors participating in this disgusting behavior.

Believe it or not, in 1924 it was put into the code of ethics that  "A Realtor should never be instrumental in introducing into a neighborhood a character of property or occupancy, members of any race or nationality, or any individuals whose presence will clearly be detrimental to property values in that neighborhood."

For such an outstanding organization today, this was totally out of character as this language suggests.

Steering became a significant part of the real estate landscape with blacks being forced into specific areas of major cities and towns. It laid the pattern for segregation in our country.

Racial deed restrictions became even more commonplace in the United States after 1926, when the Supreme Court ruled that they were legal. These restrictions were typically used to prevent black Americans from purchasing or living in homes in white neighborhoods.

The United States Supreme Court changed their position in 1948. The court decided that racial covenants were no longer enforceable.

Unfortunately, that did not stop communities from enforcing these awful restrictions. Up until 1968 it remained legal for Realtors and owners to discriminate on the basis of race.

Congress passed the Housing Rights Act in 1968, which outlawed discrimination on the basis of race or ethnicity in the sale or rental of housing. This act helped to ensure that everyone would have equal access to housing opportunities regardless of their background.

The tide started to turn when fair housing laws were introduced that real estate agents and property owners were required to follow.

The United States signed into law under President Lyndon B Johnson, the Civil Rights Act of 1968 during the Martin Luther King assassination riots.

Racially motivated covenants became illegal and unenforceable. Under the fair housing act discrimination is unlawful based on any of the following conditions:

A real estate agent found guilty of any of these discriminatory practices could lose their license to practice.

While discrimination still exists today, we have come along way. Most sound thinking, morally correct individuals don't identify someone by the color of their skin or where they came from.

We are all equals. To think about how some people were treated years ago can make me sick to my stomach.

Whether you are a buyer or a seller, discrimination should never be tolerated. If you encounter an agent making any kind of racist remarks, fire them. Agents like this need to be taught a lesson in life.

Change comes when you don't look the other way.

Hello Bill - real estate title issues can reveal much about our history.  Sometimes the steps we take are smaller than we may like; hopefully moving forward is the direction we continue to take.

I appreciate the comps Joe. It is amazing sometimes what you find out with a little research.

Hello Bill,  As with your research for this post, I was shocked and dismayed, and quite frankly embarrassed at what the movie "The Butler" brought forth.  Within our own government and White House hypocrisy to an extreme.  Recent years not early 1900's.  Good post, glad to see it Featured.  m

It really is amazing, especially the NAR being a blatant participant.

RE discriminatory laws were in place long before you or I became an agent. Every agent is aware of these laws and while I agree with you about racism, I don't believe we are all equal.

Because of our Constitution, we all have equal rights but each and every person is unique. Our nation is a land of opportunity to pursue happiness and prosperity. It's our choice, isn't it, we can make things happen or watch them happen.

We can not change the past but can change our future, yet, when our electorate chooses incompetent people to influence change and make laws that defy our Constitution, we'll have a major challenge. Dare I say, it will be discriminating. Only time will tell.

I’m glad those days are over but we still have a long way to go.

Very important history to understand to know what happened and why.  Thankfully, this is all public knowledge and hopefully, we can eradicate this kind of behavior.  Recently, I read a Q & A from an Arizona attorney stating that CC & R's in Arizona without an HOA may end up with civil litigation.  Hard to enforce CC & R's without a formal HOA.  Good to know when helping buyers! 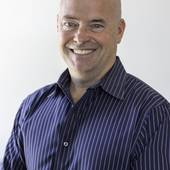 Connect with me on Google+