Book Recommendation: Next in Line by Jeffrey Archer

I enjoyed reading Next in Line (2022) by The New York Times Bestselling British author Jeffrey Archer and recommend it for your reading list. Click on the links to learn more about the author and this novel. 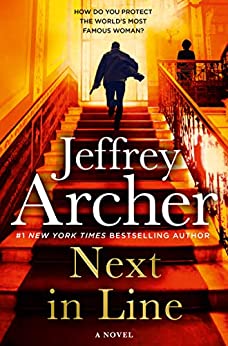 London, 1988. Royal fever sweeps the nation as Britain falls in love with the ‘people’s princess’.

Which means for Scotland Yard, the focus is on the elite Royalty Protection Command, and its commanding officer. Entrusted with protecting the most famous family on earth, they quite simply have to be the best. A weak link could spell disaster.

Detective Chief Inspector William Warwick and his Scotland Yard squad are sent in to investigate the team. Maverick ex-undercover operative Ross Hogan is charged with a very sensitive—and unique—responsibility. But it soon becomes clear the problems in Royalty Protection are just the beginning. A renegade organization has the security of the country—and the Crown—in its sights. The only question is which target is next in line…  Goodreads

He was a Member of Parliament and deputy chairman of the Conservative Party, and became a life peer in 1992. His political career, having suffered several controversies, ended after a conviction for perverting the course of justice and his subsequent imprisonment. He is married to Mary Archer, a scientist specialising in solar power. Outside politics, he is a novelist, playwright and short story writer. Good morning Roy. While I struggle for reading time you seem to be burning the midnight oil. Enjoy your next read.

Good morning, Roy... I've always enjoyed books by Jeffrey Archer... I'll have to put this on my list.

sounds like a must read for me.  Happy Monday, back to the grind.  Lots of eating over the weekend.  On my way to the gym this morning. Bill

Roy, thanks for sharing your book recommendation this morning, sounds good.