I enjoyed reading Racing the Light (2022) by The New York Times Bestselling American author Robert Crais and recommend it for your reading list. This is a Elvis Cole and Joe Pike novel. Click on the links to learn more about the author and this novel. 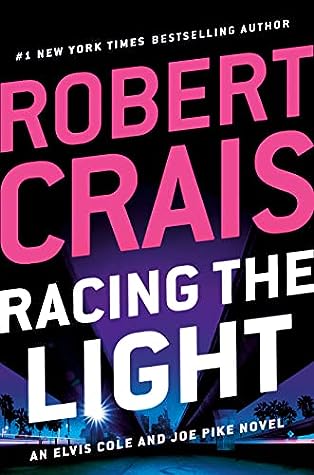 Private investigator Elvis Cole and his enigmatic partner Joe Pike are back on the case in this brilliant new thriller from #1 New York Times bestselling author Robert Crais.

Adele Schumacher isn't a typical worried mom. When she hires Elvis to find her missing son, a controversial podcaster named Josh Shoe, she brings a bag filled with cash, bizarre tales of government conspiracies, and a squad of professional bodyguards. Finding Josh should be simple, but Elvis quickly learns he isn't alone in the hunt -- a deadly team of mysterious strangers are determined to find Josh and his adult film star girlfriend first.

With Elvis being watched and dangerous secrets lurking behind every lead, Elvis needs his friend Joe Pike more than ever to uncover the truth about Josh, corrupt politicians, and the vicious business cartels rotting the heart of Los Angeles from within. And when Elvis Cole's estranged girlfriend Lucy Chenier and her son Ben return, Elvis learns just how much he has to lose...if he survives.

Written with the heart, humor, and relentless suspense for which Crais is famous, Racing The Light delivers Elvis Cole's most dangerous case yet.  Goodreads 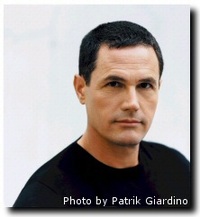 Robert Crais is the author of the best-selling Elvis Cole novels. A native of Louisiana, he grew up on the banks of the Mississippi River in a blue collar family of oil refinery workers and police officers. He purchased a secondhand paperback of Raymond Chandler’s The Little Sister when he was fifteen, which inspired his lifelong love of writing, Los Angeles, and the literature of crime fiction. Other literary influences include Dashiell Hammett, Ernest Hemingway, Robert B. Parker, and John Steinbeck.

After years of amateur film-making and writing short fiction, he journeyed to Hollywood in 1976 where he quickly found work writing scripts for such major television series as Hill Street Blues, Cagney & Lacey, and Miami Vice, as well as numerous series pilots and Movies-of-the-Week for the major networks. He received an Emmy nomination for his work on Hill Street Blues, but is most proud of his 4-hour NBC miniseries, Cross of Fire, which the New York Times declared: "A searing and powerful documentation of the Ku Klux Klan’s rise to national prominence in the 20s."

In the mid-eighties, feeling constrained by the collaborative working requirements of Hollywood, Crais resigned from a lucrative position as a contract writer and television producer in order to pursue his lifelong dream of becoming a novelist. His first efforts proved unsuccessful, but upon the death of his father in 1985, Crais was inspired to create Elvis Cole, using elements of his own life as the basis of the story. The resulting novel, The Monkey’s Raincoat, won the Anthony and Macavity Awards and was nominated for the Edgar Award. It has since been selected as one of the 100 Favorite Mysteries of the Century by the Independent Mystery Booksellers Association.

Crais conceived of the novel as a stand-alone, but realized that—in Elvis Cole—he had created an ideal and powerful character through which to comment upon his life and times. (See the WORKS section for additional titles.) Elvis Cole’s readership and fan base grew with each new book, then skyrocketed in 1999 upon the publication of L. A. Requiem, which was a New York Times and Los Angeles Times bestseller and forever changed the way Crais conceived of and structured his novels. In this new way of telling his stories, Crais combined the classic ‘first person’ narrative of the American detective novel with flashbacks, multiple story lines, multiple points-of-view, and literary elements to better illuminate his themes. Larger and deeper in scope, Publishers Weekly wrote of L. A. Requiem, "Crais has stretched himself the way another Southern California writer—Ross Macdonald—always tried to do, to write a mystery novel with a solid literary base." Booklist added, "This is an extraordinary crime novel that should not be pigeonholed by genre. The best books always land outside preset boundaries. A wonderful experience."

Crais followed with his first non-series novel, Demolition Angel, which was published in 2000 and featured former Los Angeles Police Department Bomb Technician Carol Starkey. Starkey has since become a leading character in the Elvis Cole series. In 2001, Crais published his second non-series novel, Hostage, which was named a Notable Book of the Year by the New York Times and was a world-wide bestseller. Additionally, the editors of Amazon.com selected Hostage as the #1 thriller of the year. A film adaptation of Hostage was released in 2005, starring Bruce Willis as ex-LAPD SWAT negotiator Jeff Talley.

Elvis Cole returned in 2003 with the publication of The Last Detective, followed by the tenth Elvis Cole novel, The Forgotten Man, in 2005. Both novels explore with increasing depth the natures and characters of Elvis Cole and Joe Pike. RC’s third stand-alone novel, The Two Minute Rule, was published in 2006. The eleventh entry in the Elvis Cole series, The Watchman, will be published sometime in 2007. Good morning Roy. So many books, so little time! Grandkids can consume time in large chunks. Enjoy your next read.

Racing the Light by Robert Crais sounds like a good read for the bookworms, Roy.

Another great book recommendation that should prove to be an excellent read. There is only so many hours in a day so I'll have to put this one on the back burner!

Roy sounds like a must read.  Love the adventure novel. Have a great Taco Tuesday. Bill

Good morning, Roy... sounds like a very interesting story line... for some reason I have no recollection of your featuring this author previously.

Light moves pretty quickly so I don't think I will ever try to race it, but I may one day read this book, haha.

Thanks for the book recommendation Roy, and hope you are enjoying your day so far!

Hi, Roy; I love Robert Crais's Elvis Cole series. I first knew about him by reading his first in the series, The Monkey's Raincoat. I still have the book in my private library!

Thank you for this suggestion.