Many people have never heard of Secane.  Some would guess that it is a shore town in New Jersey, or somewhere else near the "sea".   In fact, the area known as Secane is roughly 6 miles west of Philadelphia and lies in both Upper Darby Township and Ridley Township.   The closest thing to the sea is the Muckinipatus Creek which runs through the area.

Secane is not actually a town but the name of the section of the township and the post office which serves the area (this may contribute to the confusion).  For mailing purposes a resident's address is Secane but their actually municipality is either Upper Darby or Ridley.   Other "towns" in Delaware County which are actually sections of a township include: Holmes, Milmont Park, Folsom, Westbrook Park, Drexel Hill and Primos.  The area may also be referred to as Primos-Secane which is the actual name of the post office, although the area known as Primos exists only in Upper Darby Township and not in Ridley.  (A bit confusing especially when having a pizza delivered).

Legend has it that Secane was name after Chief Secane (alternate spelling Sicanne) of the Lenni Lenape tribe that once inhabited the area and the Muckinipatus Creek named after his son.  In fact, in the wooded areas along the creek you can almost imagine what the area may have looked like when the Native Americans lived there.  It is not uncommon to see wildlife such as deer, rabbit, fox, and raccoon although the area is pretty much developed save for a few patches of woods here and there.  Almost like living in the country without having to drive 10 miles to the nearest store.

Living in Secane and commuting to Center City Philadelphia is a snap.  The Septa R3 train offers an Express train leaving the Secane Station during rush hour times and will have you at your destination in only 20 minutes.   You can walk to the train station from most locations, but there is also limited parking should you wish to drive.  Secane is also conveniently located to major roadways such as the Blue Route (I-476) and I-95 (about a 10 minute drive to both) and about 15 minutes away from Philadelphia International Airport (no highway driving needed). The Springfield Mall is located 3 miles away and numerous shopping centers, restaurants, and other retailers are even closer.

As one who was conceived in Primos and born in Secane ( no hospitals ! ), and wandered along the upper

Muckinipatus swamps as a four year old, I'll attest to the imprint.  I proceeded to spend my best 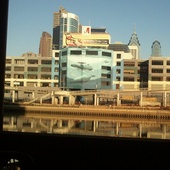