It started as another beautiful sunny day down here in Cape Coral Florida,but sometimes things aren't always as bright as they appear.  Late last night I received a telephone call on my cell phone, from someone who had seen my ad in our church bulletin.  The call came in around eight o'clock, and he said that he would like to see me tomorrow morning because he had to sell his home.  It seems that I have received a lot of those phone calls lately and I immediately assumed that he too was unable to pay the mortgage and was going to lose his home.

When I arrived this morning, he greeted me at the front door with his three young children.  I asked where his wife was and he informed me that she had left last Friday when he got back from out of town.  It seems that due to the economic conditions in Cape Coral of the last two years, he was unable to find work as a building contractor. In an effort to support his family, he returned to the northeast where he had come from, and was working up there for weeks at a time. When he arrived home this time after seven weeks, up north, his wife informed him that she wanted a divorce.  She had taken a part-time job at a local restaurant and had become romantically involved with a fellow employee.  She claims that she was lonely, while he was out of town!

While I was sitting at the dining room table, his wife came in the back door and asked who I was! He introduced me to her and explained that I was there to tell them what their home was worth.  They then proceeded to go into the back room, and I could hear a very loud discussion going on!  I was left sitting in the dining room as the three young children lay on the floor playing a computer game.  Shortly thereafter, he came out of the back room and told me that he was not doing too well inside.  And that she was going to call his parents to come over and then she left with the young daughter.

He then came back outside and join me in the dining room clearly upset.  He apologized to me numerous times, and I just felt that that point, there were more important things to discuss than the new value of their home.I asked him if he would like to talk, and if there was anything at all that I could do to help him. I spent the next 45 minutes to an hour just LISTENING!  I too have been through a divorce, and I know how traumatic it can be. I also know that there are two sides to every story! I was careful not to take his side, but I did listen. His parents arrived shortly thereafter, he thanked me and I moved on!.  I told him that there will be plenty of time to talk about the sale of his home, but right now he had more important things that he needed to take care of!

Just five minutes ago, I got a phone call from that gentleman.  He said Mike, "I just want to thank you for listening to me today!"

You may never know the full impact of the significance of taking time to listen to someone who's life is in turmoil....

Although we are taught to pursue goals and achieve

I think God looks at the individual moments ( not the end results) and how we treat others in the present circumstances difficult as they may be...

I think you will be blessed for listening Mike

we are people 1st, then Realtors 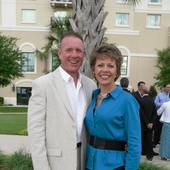