According to recent press...  Here's the top 4 reasons people don't care for the idea of a split level home, and how you can make them the most desirable home on the market...

Splits soared in popularity during the 1970s, when modest-priced lots called for modest homes that made the most of limited square footage. Today, they can be salvaged to fit modern life. Here's how. By Christopher Solomon, MSN Real Estate

Few things recall a certain time in America - and evoke strong reactions - quite like the split-level house. Just saying the name conjures "The Brady Bunch," doesn't it?

But Americans long ago fell out of love with this ubiquitous home style. While 12% of new homes built in 1975 were split-level homes - 21% in the Midwest - in 2006 they represented less than 1% of the new homes built in the country, according to a National Association of Home Builders survey.

Yet there are signs that - if not exactly a revival - the split is getting new respect. The reasons range from nostalgia for splits, as the so-called "midcentury modern" style increases in popularity, to the migration of more people from sprawling suburbs back to the split-filled inner-ring neighborhoods, with their easier commutes to cities.

Both trends have people retooling splits for today's way of living.

"There are a lot of them, and they were kind of inexpensive to begin with, so you don't really tend to think of luxury and split-level together. But that doesn't mean they're hopeless," says Ann Robinson, a partner in Renovation Design Group of Salt Lake City. "You can do some really interesting things" with them, she says. (Check out our slide show for some examples.)

What is a split? And why do they exist at all?
What is a split, anyway? For most of us, a split is sort of like pornography - we know it when we see it. But "split" and "split-level" are general terms for two different kinds of homes:

Though splits began to appear as early as the 1930s, they really took off in the post-World War II building boom, and were popular through the 1970s for a number of reasons:

4 common complaints about splits - and what to do about them
Still, splits fell out of favor, and for a reason - make that many reasons. They're dated and dark, to name two common complaints.

But that doesn't mean they can't be rehabilitated, say architects who get excited about their possibilities. "They are very amenable to being opened up and changed," says Battles, principal of Acacia Architects in Minneapolis. His firm specializes in remodels, and has worked on retooling several splits. "They can be easily adapted, and 'curb appeal' added, because they are so simple and plain in their form. So it's kind of like they're a clean slate."

Here are some of the most common gripes about splits, along with suggestions on how to resolve those issues from architects who have revitalized many:

1. The problem: No curb appeal. Split owners often complain that their homes are ugly on the outside and not particularly welcoming. Why? Monolithic rooflines. Big garage doors that distract the eye. Front doors that get lost in an ocean of plain siding. A gaping "gutter" - like a wide gap between two eyes - between the main windows of the house.

To the rescue: Add some visual excitement. Touches both small and large can really make a split a place you want to come home to:

2. The problem: Floor plans that don't foster entertaining. Many splits were built with the kitchen wedged into the dark rear of the house, on its own, with little flow into the rest of the house or interaction with the living room or family room. "People are generally coming to us and wanting more gathering space. That means opening up the great room, and making the living and dining and kitchen areas not all in little boxes," Robinson says.

To the rescue: Explode the kitchen. There are several ways to make this part of the house fit with today's style of living, in which the kitchen is the social center of the house.

3. The problem: It's too dark. Splits often weren't built with windows on their ends.

To the rescue: Installing windows can add a feeling of space. Add windows at both sides of a corner when possible to bolster that effect, Gerloff and Battles say. Here's another idea: Add a four-season outdoor room behind the kitchen that will add space while letting in lots of light.

4. The problem: Not enough room. A frequent complaint is that while splits often have several bathrooms and bedrooms, they are so tiny that little more than a twin bed can fit in them.

To the rescue: Robinson says she will sometimes suggest that clients create a master bedroom by gobbling up the adjoining bedroom, creating a single suite from the two. If you opt for Mangan's suggestion of building an entire addition onto the rear of the split, there's not only more room for an expanded kitchen, but also for a master bedroom and a master bath - without losing any other rooms.

Clearly, all isn't lost when it comes to the homely split-level home. All it requires is some creative thinking. And maybe an architect. And, of course, money. But retooling a split is a good investment, Battles says.

Other popular and related links...

I agree with most of your points, however, some people just like them. Not everyone entertains, and I never notice how dark they sometimes appear until I see that mentioned in your post and I have to agree many times they do seem dark. Interesting topic for a blog post thanks

We have a true split-level home. We opened the dining room and added a breakfast bar, made the kitchen and eating area huge. We do not like that the main level doesn't have a bathroom or bedroom.

Split levels are horrible floor plans, especially the true split level plan where you walk in the front door and either go up a flight of stairs or down a flight of stairs. Because the levels and uses are segregated from each other by a change in elevation it's impossible to open up the kitchen to the living spaces and vice versa. Typical of the 60's and 70's, very bad Architectural design. Yuck.

Is it possible to add on a second story to a split entry? The kind of split with the big 3 car stall garage sticking out in front

I bought my parents tri-level when my mother moved into a nearby retirement home. Just grit my teeth & did it. Now I love it! No long staircase anywhere -- no more than 7 steps to any floor. My split has huge living room/dining room picture windows facing each other; kitchen has normal window over sink & glass door to outside. Had bump out china closet put in for extra room in dining room. Widened doorway between kitchen & dining room, but kept living room wall. Needed for kitchen storage and huge mirror over couch, which reflects light into the room. Wish there was room for a powder room on that level, but there isn't. Put one in basement for family room. A compromise. As I age, this home is very comfortable.

The real problem with splits is that so much of the living space is effectively built into the basement. I have yet to see a split where the "basement" level isn't damp and musty smelling 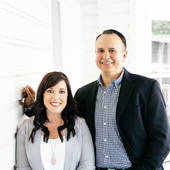