In a recent blog on Inspirada Homes, I mentioned a new resort that will be opening next year. The $1 billion M Resort on St. Rose Pkwy. at Las Vegas Blvd south is 2 months ahead of schedule and opens March 2009. The project is a partnership of Anthony Marnell III, son of construction contractor Anthony Marnell of Marnell Construction and former Rio Las Vegas owner/ builder fame, and MGM Mirage. 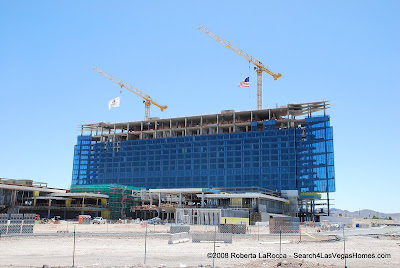 Seeing unusual lights and objects in the skies over and around Las Vegas isn't out of the ordinary. Surrounded by federal lands and top secret test sites, this can be expected. KLAS TV Investigative Reporter George Knapp's Area 51 reports have aired for years. So this is a heads up so you won't call George with a sighting.

A few months ago, Anthony announced that he would be bringing in a 'Lightship' to advertise his new property. The 178' long, internally lit helium filled blimp is set to debut on Wednesday, September 3. In addition to the logo on one side, the other has a 70' x 30' superbright LED TV screen on the other, making it a floating video billboard. It takes a crew of 16 to operate the Lightship, produced by Lightships Group of Florida. It's also expected to visit southern California to not only advertise for the resort, but hiring employees. For more details and pictures of the Lightship, check out Las Vegas International Journalist Steve Friess' 'Vegas Happens Here'.

UPDATE: I heard yesterday that there will be a delay of the launch for a few weeks. The final LED panels had a delivery delay and will have to be installed once they arrive.

Of course this isn't the highest 'high rise' proposed for Las Vegas. Tucked away in North Las Vegas is Bigelow Aerospace, founded by Budget Suites of America owner Robert Bigelow. He's spent in excess of $100 million of his own funds and has had 2 successful launches of his space technology. What is Robert testing? This successful entrepreneur is working on an inflatable space station that could be used for.....what else? A space hotel for suborbital tourism.

From the recently opened and color changing Eastside Cannery, to the soon to open Aliante Station, then all the Strip projects with Wynn Encore, City Center, Fontainebleau, and so much more, there's still more to come. Las Vegas will continue to push the envelope that has spawned it's tremendous growth this far. It's a can-do city that makes it a one of a kind, always trying something new to reinvent itself, drawing new investment and leaving new jobs and opportunity in it's wake.

If you are interested in relocating to Las Vegas or would like information on Las Vegas real estate, please email me roberta@search4lasvegashomes.com or call me at 702-354-8988. I look forward to hearing from you!

They do it big and grand in Vegas!!

Are you seeing the market coming back yet??  I've been speaking with agents in California and Florida and they are seeing better market activity since President Bush signed the Housing Bill at the end of July... (I blogged about it, if you're curious)

Roberta - I really like the information on your posts and the way you lay it out, very impressive. I believe I can learn some tips from you, thank you. You have to love all the new activity going in Las Vegas, you know what I mean?

HOW COOL!!! I'm gonna have to keep my eye on this to see how his project turns out. It looks pretty impressive.

Bill: Yes they sure do it big here. Actually the market has been coming back since the beginning of the year. Sales increases each month since then.

Robert: Thanks! Yes, enjoy having all the new that's underway and once the financial markets loosen up, think there will be much more than what is underway.

Elizabeth: Yes, cool stuff around here, and you never know what they'll do next....the sky's the limit! Thanks for the compliment!

It definitely is going up fast!  I ride my bike every morning for exercise on St. Rose Pkwy and it's been amazing watching it take shape from a former gas station to a building thats almost complete!

Tony: Yes, it sure is. Then once this is up and running the 1 million square foot mall coming to that former truck stop.

Update in the post.....launch has been delayed, so don't strain your neck looking for it just yet. :)

M Resort is starting their hiring process. Unfortunately you won't get on payroll until spring 2009. I've heard rumor that there's going to be a Bloomingdale's or Nordstrom's at this mall? Anyone hear of this?

Allison: Yes the hiring is underway, but with the opening moved up to March I'd imagine some will be in training and opening prep before then.

Marnell says they're planning for 4 to possibly 5 department store anchors. No one is signed as of yet, but those were some of the names being tossed out since upscale mall developer Tauban Centers is the partner in the proposal. Lord & Taylor was another name mentioned as a possible.

This building looks like it is going to be a real eye catcher!

Jenette: It's a very slick design. The blue glass even looks better than the conception image they have on their website.