God only knows...I wonder the same thing.  When I wonder about things like our current economy I turn to people who know a little more about these things than I do.  Dave Ramsey is one of these people.  Here is an exert from a recent post by Dave Ramsey

Dave's Thoughts About the Economy

Over the past month, we've witnessed the largest bankruptcy in history, the stock market dropping like a rock, and the talking heads on TV freaking out that the world is coming to an end. I'm here to tell you the truth-we're going to make it. We're going to be fine. Take a chill pill.

This month I've compiled some of the most-asked questions I've gotten recently from you:

Are we okay, Dave?

Definitely. Remember Enron and WorldCom in the recent years? We survived that. But much worse than all this was the financial crisis of the ‘80s - S&L collapse and 1,000 bank failures in 2 years. We're nowhere near this type of thing; that was probably 50 to 100 times worse than all of this.

What does all of this come back to?

Greedy banks financing homes to broke people. It all seemed to work okay in their minds when the economy was booming, but when the economy slowed a little bit broke people quit paying on their subprime mortgages. DUH. No wonder they went out of business. Stupid decisions.

Is there anything we can do to fix this bailout mess?

YES! Here's a quick summary: Companies that had billions in subprime loans were feeling the effects of their stupid decision to make those loans in the first place, and practically gave them away for pennies on the dollar. But since no one wants these loans, and they've had to mark them down to market value, it has frozen the market. If we temporarily change the rule that forces companies to do that, that will free the market up.

This is an absolutely huge deal, and it involves everyone getting in touch with their congressperson before we spend hundreds of billions of dollars that we don't need to! Learn more

Will the collapse of businesses and banks affect me?

No, not unless you work there. Thousands of stock brokers on Wall Street have lost their jobs in the past few weeks, but that happens in other industries across the country in good and bad times. This time it just happened in NYC where all the national news media is so they made a big deal of it.

If I have 401(k) money in a Merrill Lynch or AIG trading account, should I move the money elsewhere?

No. Your money isn't with them; your 401(k) money is in the stocks. These big companies are just managers (unless you directly own stock in their company). The only thing that may be an issue is if they crash later, you may have some customer service issues, but your money is still safe. This is a good reminder to not have all of your money in one stock-that's stupid. Always spread out your money in various growth stock mutual funds.

With these acquisitions, will my 401(k) account and entire portfolio with Merrill Lynch be lost?

No. They just own the company Merrill Lynch. Look at it this way-if I owned 6 rental properties and hired a management company that eventually failed, I would still own the properties; I just wouldn't have a manager. Your broker doesn't have title to your stuff. Your 401(k) is not a company asset; that's the beauty of it.

Should I sell my US stocks to buy gold and foreign stocks?

Absolutely not! Why would you think foreign stocks are any better than US stocks? Again, diversify your money in good growth stock mutual funds instead.

What practical lessons should small business owners learn from these bank difficulties?

When you have no cash, you freakin' go broke. You must keep some cash on hand, no matter what kind of business you have. Give yourself some wiggle room where you can take a hit and still be standing.

Remain calm, America. We're in a slow time, but just pay your bills and you're going to be fine.

Holt,  I love to listen to Dave Ramsey.  He gives good advice.  Get out of debt and save money. That's the secret to living well financially. 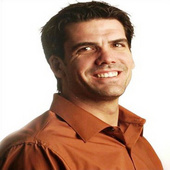 All things interesting to me...life, family, God, real estate, Dallas, the great outdoors, home remodeling and anything else that comes up.
Holt Barber
Ebby Halliday REALTORS