In dream state as a kid you always dreamed of the "Superman Thing" and kid flying us guys really never gave up on the thought of someday flying in a open cockpit plane of some sort , well this is a true story of a dream which very nearly turned to tragedy. I was in the Keys last year in June with my friend Steve ,it was oh so hot and humid and when we went to see a friend of Steve's he said come to the beach at @9:00 in the mornings and i will take you flying in my BOAT ( There's me thinking of maybe hes a Parrothead who just happened to know Jimmy Buffet with his Flying Boat) well it wasn't to be it was a 15' long inflatable boat with a redneck motor on the back with a Snow-mobile engine and it carried two people (we was hooked!!! the Pilot said put the helmet on and i put it on and he pointed where to sit in back and 10 seconds later we where flying at 500'!!!!!!!!  10 minutes later it was Steve's turn when he came down we looked at each other and said we want two .(pilot did a double back somersault with a half twist and landed on his feet punching the air and giving himself high fives and shouting "Who's your Daddy"

we spent the next two days getting our Ultralight Pilots license and passing (this is the most unbelievable thing coz me and Steve would not be thought of as  the sharpest tools in the wood shed , between us to get the Florida Real Estate License took more times to take to pass then Great Brittan got Gold medals at the 2008 Olympics which is lots and lots ,we only passed coz we took it so many times we knew the Questions before they came up on the teleprompter computer screen.Now we be pilots and we got pocket licences for our wallets , "Now who's your Daddy"

after 10 hours or so with pilot instruction it was time for my solo ,i got in put my foot down on throttle and sped off wayyyyyyyy faster then with the Lard Ass pilot as his 220 lbs missing and my 200 lbs present i only needed less then 100 ' and i was going what felt like straight up i went up to 800 ' and went in for my first landing on the water ( i was scared outta my pants , really scared like all the minutes of training coming down to a good landing , and then Boom Splash i was landed and planing away for another go ,all fear set aside.that night Steve and i talked to the early hours about how we will sell high end Homes with free Aeriel Photos and future trips across the Everglades and on to the Bahamas ,My Dreams where filed with trips along the Amazon................THEN IT HAPPENED!

When Steve's plane arrived we decided to cancel mine and own the one plane together and after nearly 9 months of waiting for it to arrive from Italy (our thinking was if the Italians can make some of the best sports cars in the world why not flying boats believe for us it wasn't a stretch , as we where living our dream

We got our plane in Port Charlotte ,Steve spent the Morning taking it up and then it was my turn , i headed into the wind and got up to 50' and it wanted to come down sideways fast , i mean really fast .Like slow-mo fast , i felt like a down draft pushed me soooooooooo hard into the water and i really dont know how i managed to keep from turning over i went ashore and had enough for that day .

Stev and i went up next day , he as pilot me as ballast weight, we went up and flew 100' above the beach and saw Sharks and ambush waiting Tarpon , Beach Goers waved like we where Rock Stars,Life is good

we landed in a Barrier Island Lagoon , and Steve went to take off, we got up to about 150' and to the left was a 20' boat no where near our take off path was , then it happened we fell out of the sky heading straight for the boat with about 4 guys on-board,,, Steve had three choices ,water ,boat ,land ,as 150' falling goes real fast and a lot of luck took place we sort of veered to the land and hit with such a force i heard Steve's air got knocked out of  his lungs as i was a tandem passenger and my 200 lbs weight slammed into him and i thought he was knocked out ,next i knew Steve said you OK i said yes but why are we going under water , then i saw the flying boat was turning Poseidon Adventure on us as the boat was turning over we couldn't get our safety belts loose it was in bedded in my fatness then the same time our life jackets inflated full open and Steve said he couldn't breath as the control bar was jammed across his chest ,and we where fast looking bad !!

then i heard shoots of "you OK" i remember screaming to stop the left wing from going under as we will tip over and drown ,these four Knights got under the wing tip and pushed in deep water enough to stop the roll,by this time i freed myself and floated away turned back and saw Steve got freed !

Our boat was a crumpled mess with the engine under water all electronics ,it was more like a submerrine then a boat

after a couple of hours one of the name less Knights got the engine going and we got back home with a badly damaged plane but alive thanks to our new friends...we never fixed the flying boat we gave it back to the guy in the keys ,and as we never had writing materials we could never thank the four guys who really saved Steve and i ,i felt bad as it was without doubt them who saved our Bacon

Now im out at the public marina and I'm with Steve and my son Chris's and St eves Dad Scott and i am waiting for Steve as always and i get talking to this guy about fishing and he mentioned a flying boat crash and low and behold its one of the guys who save us .he emailed me and wrote:

what can you say we is here selling real estate in Florida , and we lived our dream!!

(where looking at mini submersibles now !!) nice to see your article, see ya again my friend.

Happy New Year to you and yours from Pinellas County, where the market is picking up again!!!!

Hey, are you still blogging or have you given it up??? 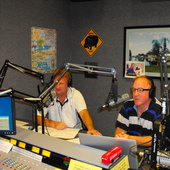 about 14 years ago
bookmark_border
Looked like a good idea flying in a ULTRALITE FLYI ...
View more Recent Posts   arrow_forwards