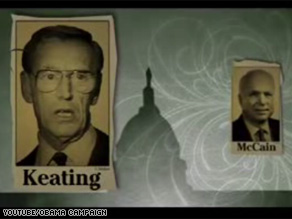 Monday the Obama campaigned rolled out a Web site and online documentary about Sen. McCain and Charles Keating.

"McCain intervened on behalf of Charles Keating with federal regulators tasked with preventing banking fraud, and championed legislation to delay regulation of the savings and loan industry - actions that allowed Keating to continue his fraud at an incredible cost to taxpayers," the site says.

The Facts: Keating was sentenced to prison and required to pay more than $1 billion in civil penalties after being convicted on fraud, racketeering and conspiracy charges centered around his running of Lincoln Savings and Loan, which he bought in 1984. On April 14, 1989, Lincoln was seized by the government at an eventual taxpayer cost of $3.4 billion, then the most expensive thrift bailout in history. Lincoln and Keating became national symbols of the savings-and-loans collapse of the '80s - much as lending firms Fannie Mae and Freddie Mac have symbolized the current financial meltdown.

McCain had been friends with Keating since the early '80s - their families vacationed together several times, according to previous CNN reporting. Keating was an early financial supporter of McCain's political career and donated to his campaigns repeatedly over the years. Keating's first company, American Continental, was headquartered in Arizona, the state McCain represents. McCain became one of the so-called "Keating Five" - five U.S. senators investigated over accusations they tried to interfere in a federal investigation of Keating's role in the savings-and-loan's collapse.

In January 1985, while in the U.S. House, McCain co-sponsored a resolution that would have delayed the effective date of proposed government limits "on direct investment in real estate, service corporations, and equity securities by federally insured savings and loan associations." He was one of the early sponsors, although a majority of Congress eventually signed on to sponsor it. The legislation would have impacted Keating's business, but would have regulated the entire industry, not specifically Lincoln Savings and Loan.

McCain also wrote several letters to government regulators and other officials regarding the issue. One, dated Jan. 30, 1985, to White House chief of staff James Baker, called the proposed regulations "unwise," saying the effort "flys (sic) in the face of our recent efforts to remove the hand of government from the affairs of private enterprise."

On April 9, 1987, McCain and the other senators attended a meeting with federal regulators investigating Keating. McCain has since said he regrets doing so. "He asked me to help him," he said during an October 2002 interview with Chicago's WGN-AM radio station. "I said I wouldn't do certain things. He called me a wimp. I threw him out of my office, but I still went to a meeting with four other senators with a group of regulators."

McCain testified that he never asked for anything inappropriate during the meeting, and the Senate ethics committee found that, after regulators said the firm was being investigated not just for insolvency, but on criminal grounds, McCain took no further action on Keating's behalf. In the end, the committee recommended McCain and Sen. John Glenn be dropped from the probe - although McCain was rebuked by the Senate for using "poor judgment" in his relationship with the millionaire banker.

McCain did push to delay regulations that would have cracked down on savings-and-loans practices and intervened on Keating's behalf, although he was cleared of wrongdoing in the "Keating Five" case.