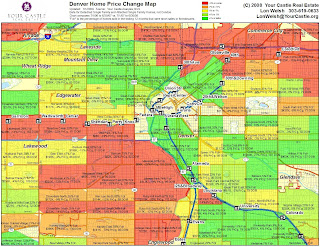 Thanks for the overview.  Knowledge is power and we need to make sure our clients and peers are informed.  I can't wait to see the next versin of this blog.  Our clients will continue to benefit from the great info you are posting.

Very interesting that some areas have a relatively high foreclosure rate (above 25%) with a positive average price change.  The Baker neighborhood is a perfect example.

Awesome Information!  It definitely pays to educate everyone in the investing process.  With all of the free classes that Your Castle provides as well as the knowledgeable agents it would be hard to go wrong with using an agent like yourself.

It is amazing to see how much some of these markets have dropped and look like they are continuing to drop.  I hope the bottom is near for some of these communities.  On the flip side, what a great market to buy an investment in, right?

I saw an article in the paper about how many of owner occupants are having a really hard time competing with investors.  It seems that even though prices are still declining, the listing brokers for banks are creating bidding situations.

What do you think the Denver market is going to do in the near future, given the bailout plans? Has your business slowed down at all? Mine has only gotten better since it's such a great time to buy.

Have you heard that the days on market have been decreasing the last two months?  I think that maybe we are past the bottom and climbing on up. It will still take some time but I'm seeing the first signs of things turning around.a

It is amazing to see how much some of these markets have dropped and look like they are continuing to drop.  I hope the bottom is near for some of these communities.  On the flip side, what a great market to buy an investment in.

Your information reflects a true depiction of what is going on in the Denver market. I like the way you have put this information. It is insightful but matter of fact.  Do you send this information to your clients or just use it in your brokerage?