Posted on October 10, 2008 by bostonkayakguy 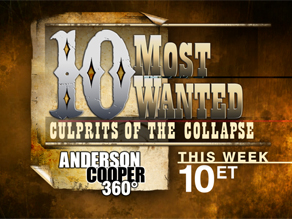 Who is to blame for this monumental financial meltdown that is sucking the lifebood out of the taxpayers?

While the politicians have said now is not the time to point fingers, many of us believe that now is EXACTLY the time to hold the culprits responsible.

With a few exceptions, the perpetrators have been referred to as predatory lenders, CEO’s, liberal lending policies (which is a thing not a person, but politicians are at the root of this category,) manipulative traders, and lying mortgage applicants.

While we will weather this storm, it’s time for accountability.  It’s time for the media to do something it hasn’t been doing…and that is to name names.

It’s time to lift the veil off the identities of those who caused America’s financial death rattle.  Who did this?  They must be held accountable - morally and legally.

Because they must be stopped from continuing to do it.  From behaving like AIG: asking and getting billions of dollars, spending money foolishly, and then turning around and asking, no rather then demanding that the taxpayers give them even more!

We must insist on oversight with these monies.  We must make certain that the  money is used for the purpose for which it is intended.

And we must hold the culprits accountable.

Tune in to CNN, Anderson Cooper to learn the names and faces behind America’s financial fiasco.

So who is to blame for this financial fiasco? That’s the question we’ve begun investigating. We’ve put together a list of the Ten Most Wanted: Culprits of the Collapse. This week and next week, every night, we will be adding a name to the list and telling you what they have done, and how much it’s costing you. It’s a rogues gallery of Wall Street executives, politicians, and government officials who did not do their jobs. It’s time you know their names, their faces, it’s time they be asked to account for their actions.

It May Not Be Liptstick On A Pig, But It Sure Is Red and Sure Is Piggy

Bailout Sweetspot For Some, Leaves Sour Taste For Others