In August (latest month with available statistics), Montgomery MSA (Metropolitan Servicing Area) is listed as having a civilian labor force of 173,700 with 164,300 employed and an unemployment rate of 5.4%. Since January 2008 the unemployment rate has varied from 4.1%(Jan), and 4.4%(Feb) to a high of 5.5% (July). Alabama's August rate was below the national rate of 6.1%. Government jobs represent the highest number of jobs in Montgomery with 42.9% of the local work force. (U.S. Department of Labor Bureau, Labor Statistics)

The market continues to slow with buyers looking for the better deals. Market concerns may be a factor for some buyers along with difficulty in obtaining mortgage money. Investors are still in the market helping in the sale of some depressed homes. Some builders holding vacant new homes are making great deals and in some cases offering properties for rent and lease purchase to assist their bottom line. A number of homes are being sold on the foreclosure market and these range in price from 19k up to over 350k. As we go into October some sellers are taking their homes off the market for the November/December holiday season and will probably put their home back on the market February/March time frame.

These comments and statistics are updated every month with new comments being added around the 10th of the month. Your input is solicited, email your comments and suggestions to the editor jimvanermen@yahoo.com

On October 10, 2008 there were a total 3,444 properties on the market of which 509 were new construction. A new statistics which is now being included is the number of active homes which are also listed as vacant 1,645. Changes in the the number of homes listed as vacant may provide a future indication of possible home foreclosures.

Is the Montgomery market headed for a recession? It is rather hard to find the statistics for my following observations but the logic appears to hold. In analysing the major sources of income to the area it appears are 5 major sources of income which do not follow the trends which impact the nation as a whole. First, Montgomery is the state capital and employees any number of state employees along with supporting employment. Does a state government ever cut jobs? If the state government maintains current employment levels you hear of the hardship placed upon any number of state organizations. Second, Montgomery supports Maxwell Air Force Base and its annex Gunter. During the past decade when any number of base foreclosures occurred Maxwell only gained. Third and Fourth, retirees from the state government and the military find the area most inviting due in part to the low cost of living and a property tax that is one of the lowest in the nation. Since their retiree paycheck is more or less indexed to the economy this only adds to a stable income flow into the area. Fifth, Montgomery was the previous capital of the south and an undercurrent of "old" money still exists in the area. So when other parts of the nation are affected from a turn down in the economy, Montgomery in my estimation is less effected.

A total recap for the year of 2007 using the complete MLS servicing area has the total number of properties sold as 5,393 totaling in price $905,179,202 with the average home selling for 167,843 representing 97.26 of the average listing price of $172,569 and averaging 92 days on the market. The web site supporting the Montgomery MSA with consumer access to the Multiple Listing System (MLS) can be located at: http://RealtyVan.com 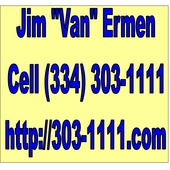