John Prescott's The MetWest Scene...Politicians On Board?

Posted on October 14, 2008 by bostonkayakguy

AS the Top Ten Culprits of the Collapse continues to roll out, we wonder when the first politician will make an appearance on Anderson Cooper

AIG/Cassano, Lehman/Fuld, SEC/Cox…those in the government who played pivotal roles in the financial fiasco are many.

Who will make their appearance in the #7 slot? 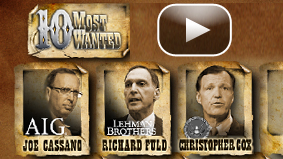