I would like to share with you a quick exerpt from a book my broker Bruce Mulhearn wrote called : the exerpt is called Eradio and it goes like this:

How do you make your mark? I was teaching a three-day seminar for 150 realtors taking their Certified Residential Broker designation course. I noticed Eradio Diaz in the front row, a blind Cuban refugee who had passed his real estate examination orally.

At the first break, I learned he was managing an office of 20 salespeople. Eradio was there to gain additional management expertise.

Working as a real estate salesperson, his father was his assistant chauffeuring his son's specially designed limousine. Eradio's typewriter was positioned at the back of the car; he typed contracts by touch, knowing exactly where to place a specific line of information. In addition, he owned a Braille calculator for completing his backup numbers.

When with buyers, they "showed" Eradio property. During the process he asked the buyers to describe each room as they inspected the home together and always requested they let him be aware of the amenities that appealed to them most. The seller's net sheets and buyer's closing costs were calculated by the prospects participating as Eradio guided them through the process.

Returning to Los Angeles, I called Eradio to receive permission to write his story in the California Association of Realtors magazine. His mother answered the phone and said Eradio was not home. She'd explained he'd had a problem with his car and the mechanic was unable to repair it. Eradio traveled to the garage and by touch he'd shown the mechanic there was a short in the electrical circuits. The mechanic then fixed the problem.

I was reminded of the old tale,

"I was saddened and defeated because I

Benny, what an inspiration!  Thanks for sharing.  Where can Ipick up a copy of this wonderful book?

Like
Anonymous
wendy woodward
benny your enthusiasum and your truly caring and investigative nature ,shows the qualities of an exceptional person, I am inspired by you B.C.You may not rise @ 5 but your there for the sunset,,,thanks for the kindness and humor you bring to world......WW
Like
#2
chevron_left
Older Post
Back to Top
Newer Post
chevron_right
Rainer
7,866 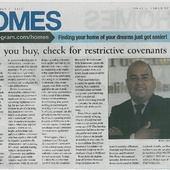 almost 11 years ago
bookmark_borderbookmark
Can't believe that with Memorial day and all I cou...
View more Recent Posts   arrow_forwards