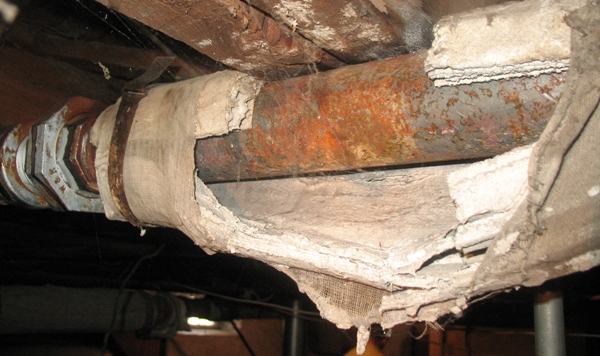 Even though the EPA restricted asbestos use as a building material in the 1970s and proposed a 10-year phase-out of products containing asbestos in 1986, people living in homes and using products built earlier are understandably nervous.

Generally, asbestos-containing materials (ACM's) do not have to be removed from any residential property. In fact, asbestos-containing material does not have to be removed from any residential structures unless it will be disturbed during renovations or demolition activities. As long as the asbestos-containing material is in good condition, in tact and will not be disturbed; it does not pose a significant health risk. It's when asbestos is exposed and friable, flaking or crumbling, and that it's likely to become airborne, is when I recommend encapsulation or professional removal by properly licensed personnel. Removal should never be attempted by the homeowner. This action requires special equipment and detailed training which would generally be too expensive and time-consuming for a homeowner to acquire for a one-time job. Removal is also the last choice among alternatives because it poses the most risk of fiber release if not done properly.

I have seen at least 15-20 homes (that I'm aware of) in my area  that were forfeited to the county/city government because of back taxes, and then TORN-DOWN, because of asbestos issues....After the government spent $20,000 or more on the asbestos clean-up and abatement...

It usually involved asbestos on vent pipes for the old octopus furnaces..... intact, and not a danger to anybody...

These homes are now gone forever (and empty lots have taken their place) all for nothing.

The government  should have just left them alone... It is such a waste of good, solid homes....

Like
Geoff Thomas
Golf Savings Bank - Snoqualmie, WA
Well much like the law says I think it's probably just fine unless it needs to be distirbed or is comming apart.  The fibers can't get out into the air unless it's being broken up so it's perfectly safe as long as it's intact.  Unless you plan to remodel and disturb it I'd say just leave it alone.
Like
David Helm
Helm Home Inspections - Bellingham, WA
Bellingham, Wa. Licensed Home Insp
Many people get freaked out when they learn the house they are buying has asbeston/cement siding.  They really don't need that freak out.   Intact asbestos/cement siding is actually one of the best materials to side a house.  It lasts a long time, takes paint well and is a very good weather barrier.  As an inspector, I am required to identify it, but I believe it is important to put this material in proper perspective.  Properly maintained, it will probably last the lifetime of the house.
Like
Dale Baker
Baker Energy Audits and Commercial Properties Inspections - Claremont, NH
New Hampshire Relocation Real Estate Information
Thank you for a very good post
Like
Please log in or register to comment
Log inJoin now
chevron_left
Older Post
Back to Top
Newer Post
chevron_right
Rainmaker
36,471