It began in earnest a few months ago. My son made contact, through the boy scouts, with the Mesa Rotary club. For the past quarter century they've been bringing Christmas to orphanages in Guaymas, Mexico.

When he asked what he could do to help- they told him to gather presents... as many as he could. With the help of his friend, Tanner,  they made a door-to-door plea within a square mile of our residence.

Together they managed to collect over a thousand gifts. Members of the Rotary club collected additional toys and candy.

These items were loaded into the planes of several volunteers. They came from Arizona and nearby states... each offering time and resources to bring Christmas to those with challenges.

We drove down to Guaymas and were quite overwhelmed by what we saw. There are four schools for children with special needs... each one has over 200 students.

Chandler and Tanner had managed to gather enough toys for everyone. The event began with balloons... then Santa arrived. The students lined up for toys... one side for boys- the other for girls.

Each student was given a voucher good for one present.

Chandler and Tanner would hold up several bags and ask which one they wanted most.

One girl was confused by this. When she was asked again "which one would you like?" - she said, "It's not for me... it's for my teacher."

It was just one of many touching moments. She had decided to forgo her own gift for someone important. Is not this the spirit of the occasion?

The act of giving trumping that of receiving?

Two teens asked their neighbors for help... and the neighbors came through. They helped these boys take part in a glorious holiday that we'll never forget.

Here are some more pictures of the event: At the doorway to one classroom was this sign, which, roughly translated, teaches this great lesson:

"The disabled have the capacity to be extraordinarily capable." 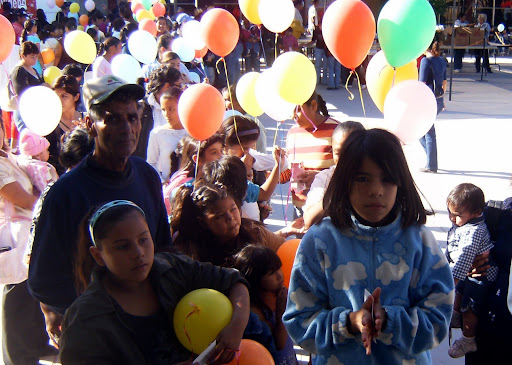 Each child waited patiently for his and her turn to pick out a present.

Boys chose from a variety of items such as soccer balls, toy cars and trucks. The girls were excited about the dolls, stuffed animals and princess accessories.

The items that seemed to be most in demand were coloring books and crayons. They enjoyed creating some instantaneous artwork.

It was a humbling experience to see that the gifts that were so freely given by our neighbors were very well received. It's a shame they couldn't see the reaction as each child received a gift.

Many thanks go to the good people of the Mesa Arizona Downtown Rotary club, the generous contributors of Friendly Cove, Forest Knoll and the Harris Park neighborhoods as well as the pilots and volunteers at Falcon Field and Stellar Air Park. They all made it possible for the Boy Scouts to join the fine volunteers in Guaymas- all the teachers as well as the Mayor and members of DIF Guaymas- the organization that coordinated local events.

Chuck - I am impressed by your neighbors but more importantly by your son.  It is truly rare to find a young man so willing and responsive to the plight of others less fortunate.  We count blessings in many ways - and I know that you count it a blessing to have a child that "gets it" in this Christmas season.  Merry Christmas!

Chuck - Thank you for entering the contest. I hope you have a have a Merry CHRISTmas and a Happy new year!

Hi Chuck - just imagine what else your son will be doing throughout his life if he's doing such wonderful things like this now!!?!?  The world needs more people like your son and his friend!

Thanks for entering this post into the holiday acceptance contest.
Ann

Eric-I think that they were helped by this... there were neighbors who were a bit shocked that they had such an ambitious goal... one neighbor was so touched that she brought dozens of stuffed animals and many boxes of art related items. I wish they could have been there to see how appreciative the recipients were.

Tami- Thank you so much... I wish you all the best during this great season as well!

Ann- There something about volunteer work that makes a person want to keep doing it. This is not a new thing for him... it's something he's always been "up for". I think that if more people had the opportunity to see the need... and then to witness the results- well... it would just be far easier to find people willing to feel the way one does after an event like this.

Chuck - what a life's lesson and story to share not only with your son and son's friends but with your readers. What a great lesson to give to those less fortunate. A wonderful warm heartfelt story. Thank you. The true meaning of the holiday and a way of life each day of the year.

Chuck - What a wonderful story.  You must be so proud of your son.  You brought him up properly.

Awesome, Chuck. What a great thing for kids to learn at such an early age. Thanks for sharing your wonderful story. Take Care, Jim

That is SO great!

Chuck:  That is so awesome!

...The apple doesn't fall too far from the tree...

Congratulatons!  You are now at the top of the Optimist board.

Chuck,  What a wonderful experience of giving for all those who participated, especially your son and his friend.  And you must be so proud of your son.  Was this your son's Eagle project?  I hear people complain about the young people of today.  This is another great example that these type of people are not looking in the right places because there are countless numbers of incredible young people in our country today.

Chuck- What a fabulous story for this time of year.  There's a lump in my throat from the sheer love that went into this project.  Your son is quite the young man...hope he gets something extra special this Christmas.  Thank you so much for writing this, it's beautiful.

Candace- I was so impressed by those who have been taking part in this event for so long. It's such a labor of love... and so rewarding for the recipients and volunteers.

Rosalinda- It's a funny thing with kids... I don't know how far parenting goes... he just happily does things like this... I think he happens to have a very giving attitude.... but hey- even if he didn't... this is one of those experiences that will produce a few man-tears from even the most grizzled of folks.

Jim & Maria- It *is* a good experience for young folks. The kids took an instant shine to these boys... it was hard to leave.

Tony & Libby- Thanks so much for the visit... I appreciate your reading this post.

Vicki-Yes... this was his eagle project. It's great that they have a program that you can't just "phone in"... it made him determined to do everything necessary to succeed. The bonus is that it was so fun and very personally rewarding. It's amazing that charitable work can have a positive impact on those being served... but it's never a one-way street. I don't know that we'll ever approach another Christmas that this experience won't live large in our memories.

Gail- See... it's reactions like yours that made people want to help. He had so many people compliment him on his goal that they couldn't help but make sure he was successful.

What a very special event and story...Sounds like he's related to you, too Chuck!  Young people always seem to bring out the best in all of us, and give us so much hope for a brighter future and a happier earth. Thanks for sharing this wonderful story.

This is just a very heartwarming example of what we can do when we come together.  You son and his friend have done a wonderful thing.  Happy Holidays.

Hi Chuck,
What a wonderful and heart warming story--the next generation will be ok with kids like this!

Together they managed to collect over a thousand gifts.  That's a Christmas miracle!

Chuck - Congrats to you for raise such a special son....that is what the holiday season is all about...what an inspiration.

Chuck - now that's the best holiday story I've heard this season and a lifelong memory for your son and tanner to have helped make the season brighter for so many. i'm think'in that has to make the community and dad feel pretty darn good too!

Chuck, Sounds like you have an amazing son.  You must be very proud of him.  What a wonderful and inspiring story.  Happy Holidays to you and your family.

You have obviously done a very good job raising that boy of yours!  You are to be given some credit too.  I'm sure you are very proud.  This is an inspiring story.