Note that these stats include all homes listed on TREB, both in 416 and 905 areas.

1) Number of Sales on TREB down by half over last year
Greater Toronto Area reported 1,487 resale transactions during the first half of December, from 2,868 sales recorded in the same period a year ago. This includes all 416 and 905 homes listed on TREB.

(Note that these figures are simply the total $ value of sales divided by number of homes sold, as such it does not accurately reflect how much home prices are falling. For example, currently more lower priced homes are being sold and this affects the weighting.)

In the 416 area (GTA), 619 transactions were recorded during the first half of this month, from 1,402 sales during the same timeframe a year ago.

In the 905 region 868 homes changed hands in the first two weeks of this month, from 1,466 transactions that took place in the first half of December 2007.

The average number of days a home now remains on the market is 43, as compared to 33 days a year ago. (Note that this reflects how long the homes that sold were on the market, for the many that overprice and have not yet sold the days on market is likely much longer.)

Thanks for the timely update Hilary.
The TREB market is huge and a bellweather market for Canada. 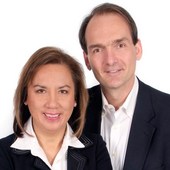