December 19th was the big night at the Jackson Hole Mountain Resort.  The new tram, affectionately known as Big Red, is officially back.  After almost 3 years and $31 million dollars the resort owners delivered on their promise to replace the signature tram that serviced the mountain for 40 years.  In true style the tram was introduced with the classic sound track played on the old tram along with fireworks and spot lights to a crowd of over 2000 who braved the cold and the snow to witness the historic event.  In a nod to the season and maybe even a symbolic gesture of gift giving, Santa Claus repelled from one of the escape hatches on the bottom of the car to the crowds below.  It was truly a very amazing sight to see given that few trams are launched in North America, the last one being some 15 years ago or so I'm told.  I snapped the following picture from my iPhone, not the greatest of quality given the conditions but you can see the new car approaching the very stylish tram station at the bottom of the mountain.  The first public rides up to the top began on Saturday December 20th and it is now open to the public. Although I've yet to ride it up to the top do to work the many I've spoken to who have all agree it was worth the wait. Dana-you working Wednesday? I may make a few tram laps if the snow keeps coming down. If you don't mind being seen with an old snowboarder, that is... :) 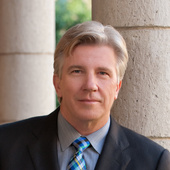