Living in the west coast of British Columbia we don't get alot of snow, so you imagine my 10 year old son's excitement when he looked out the window in the morning and saw a blanket of white.

No procrastination this time, he quickly got dressed and hurried out to build a snowman.   His mitts filled with snow he tried to form a ball, it fell apart, again he tried, no luck it just fell apart.  The conditions weren't right, it was too cold and the snow was too dry.  Unsuccessful at building a snowman he decided to try snow angels they worked well and he spent many hours enjoying the snow.

The next morning more snow, again the snowman was not to be.  I can't remember a time when we have received more snow than we had over the holidays this year.  Each morning Jordan tried to build a snowman and each morning he failed.

Yesterday there was more new snow, but the conditions had changed, it was warmer outside and the snow was not as dry.   As Jordan grabbed two handfuls of snow and formed a ball the snow didn't crush, it stuck.  He added more snow to the ball and then carefully rolled it around the yard, eventually it grew to a size that he could not be moved further.  He started another ball and when it was large enough he placed it on top of the first.  Then a third ball, complete with rocks for eyes and a mouth, dads ball cap and scarf and of course the most important part a carrot for the nose.  It was a great day for building a snowman, the conditions where right.  Jordan built a number of snowmen that day and the next day.  He only stopped building snowmen when it began to rain.

Now the snow is gone, but Jordan has tasted success and is eagerly waiting for his next chance to build another snowman.

What has this taught me as a REALTOR?

Thats a great story Paul! It was a nice way of looking at things. Thank you for sharing that with all of us! I hope you have a great day! 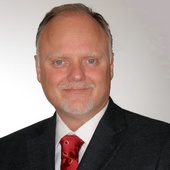