Virginia City, Montana has been named #2 on True West Magazine's Top 10 True Western Towns with Cheyenne, Wyoming coming in at first place. Among Montana on the list was Silver City, New Mexico and Austin, Texas.

Virginia City, Montana, which became the territorial capital in 1865, is one of the oldest and most intact gold rush-era settlements in the nation. Today, the Montana Heritage Commission protects most of the district's more than 200 structures. This "living laboratory" has made it the perfect backdrop for the historic preservation certificate training programs offered by the Virginia City Institute.

Not surprisingly, if you have folks around who offer technical support to other towns on historic preservation maintenance problems, then you also have an incredibly smart bunch that uses the most innovative stabilization techniques and specialized tools, combined with a high understanding of preservation ethics, saving historic Virginia City.

Mind you, this city has only 150 year-round residents. So the heritage commission folks and lead preservationist Jeff MacDonald recruit volunteers from the international Heritage Conservation Network to restore this 19th-century mining town. Currently, the town is recruiting volunteers to help stabilize the roof pitch and shore the structure of gold rush resident Susan Marr's home, known locally as "the worst looking house with the best looking yard."

For the upcoming year, city planners will be looking into developing the state's oldest park site and the site of the old capital, North Park, as a campground and special event site. The plans may also include rerouting Daylight Creek around the state's oldest brewery, the Gilbert Brewery established in 1863, to protect the area's historic structures.

The gold quickly panned out after the 1863 discovery. Then, 135 years later, the owner of the city's historic structures was forced to sell. Luckily, the state found the millions needed to purchase the buildings, and the town is a labor of love to this day. Located 60 miles northwest of Yellowstone Park, Virginia City remains architecturally frozen to its 1800s past-which warms our hearts to no end. Thank you Montana and your incredible team of stewards and preservationists.

Take a break from the ordinary to explore some extraordinary places that we invite you to call home. Contact ERA Landmark 406.586.1321 or email: relo@eralandmark.com. Visit our website www.ERALandmark.com 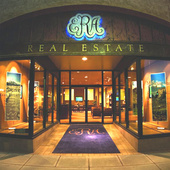