For more information and additional graphs, please the maine housing statistics section of my website www.mymaineproperty.com. I am a buyers agent serving the greater Portland and lower mid coastal region of the state.

Thanks for reading,
John 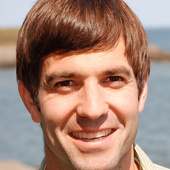