I hope the short video works here, I apologize for the poor quality in advance but I have NEVER had my CO detector rise this dramatically when testing ambient air (the air in our normal living space).

Background: A client's CO monitors started alarming Sunday morning, she called 911 and the fire co. came out immediately. She shut both heating systems down - 1: Oil fired furnace located in the basement and 1: Coal stove located in the living room. She then opened the windows to air out the house. Fire dept. was there in minutes, they started the units and had no measurable readings. They leave, saying it might be a low battery in the co monitors (mind you this lady has Four CO monitors within 800 sq ft of living space).

Monday everything seems fine to her except for a slight smell of Sulfur, Today she awakes to the CO monitors going off again. She see's My ad specifying CO testing and calls me. I turn my CO monitor on outside and let it go through it's one min. calibration (highest calibration limit I could set). Upon entering the home I had a 27 - 34 ppm reading, I test the air around the flue of the coal stove (Installed this past summer) and my co detector climbs to over 500 ppm in under 2 min.

Shut unit down advise to have chimney and unit thoroughly inspected and a co test performed after repairs are made. (Oil fired furnace was also tested with no co leakage noted).

Chimney cap prevented me from checking the chimney lining for blockages.

Note the soot on the brick wall where the flue enters the chimney and the soot under the harman logo. This inspection was only for the presence of CO so no intrusive testing was performed. That being said, I'll bet my last dollar that the flue or chimney is blocked.

Video: AGAIN this video was NOT taken in the flue, this was in ambient air 3" from the flue pipe - where the flue fits into the collar of the stove.

I believe the fire departments here carry spare batteries to verify whether or not it might be low batteries. With rechargeable batteries of all sizes now available, I even carry many different sizes in my home inspection tool bucket.

Absolutely RR, I have 3 sets of every different type of battery needed for my eqipment. Unfortunately this particular fire dept. either did not have the proper equipment or training to properly diagnose a major CO leak.

THis particular home had to be aired out, the stove shut down and the installation company called to repair the problem. 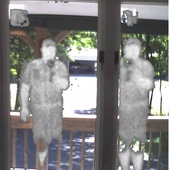 A2Z Home Inspections is independent, we work for you. Rest assured knowing that your home inspector is working only for you. Complete Moisture intrusion and Carbon monoxide analysis included. Proudly serving the following Northeastern Pennsylvania Counties: Monroe, Carbon, Pike, Lehigh and Lackawanna