There always seems to be one controversy or another going on regarding development on Kauai and the latest involves Princeville. Last night there was a "not well publicized" neighborhood meeting in Princeville with Jeff Stone as the speaker. You may know Stone as the individual who heads up a joint venture company called Princeville Associates LLC that paid around $220M back in 05 for the purchase of the 9,000-acre Princeville resort, including the 252-room Princeville Hotel, two Robert Trent Jones Jr. golf courses, a tennis club, health spa, shopping center (now on the market) airport and other land holdings on Kauai's North Shore. This meeting was to present rezoning plans for the areas known as the Meadows and the Greens, land which borders the highway and the Prince Golf course located between the Princeville entrance and the Spa.

Originally zoned R-4 for the development of luxury single family homes, Jeff is now proposing to rezone to R-10 and build 312 timeshare units. They are on the Planning Commission Agenda for the rezoning on Tuesday, January 27, 2009! His position was that the timeshares would take up less space than single family homes, thus providing more green space, however, the residents did not feel the same way.

Most felt it would be detrimental to the rural atmosphere of the North Shore, would add to the congestion at the North Shore's stores, beaches and roadways not to mention what it would do to the already almost unbearably crowded roads in Kapaa, as the visitors travel to and from Princeville to their other Island destinations. Many other concerns and questions were raised. The overwhelming response was that the character of the North Shore would be permanently altered in a negative way. Unfortunately, I have not seen the voice of the people prevail in too many occasions since I've been living here, which has been since 1991.

I'll keep you posted as to what happens next but my guess is that, unless there's divine intervention, timeshares will prevail.

This view of the pier was taken from high above Hanalei at a view point accessed by the Okolehao trail which starts by Hanalei Taro fields. 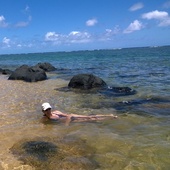