Whenever people think of “A Haunting” in relation to Long Island—just 45 minutes from New York City they automatically think of The Amityville Horror House. Made famous by a book and movie of the same name, it claimed that a house located in Amityville Long Island was haunted due to the terrible incident in the home.

An entire family murdered—it later revealed that one of the sons, Ronald DeFao had killed his entire family while they were sleeping. Although most New York Feng Shui Consultants believe very much in Predecessor Energy, I believe this later turned out to be a hoax.

There IS one place on Long Island New York that I have visited once before and tend to stay away from. It was the earliest stories of Hauntings I’d ever heard as a child. I went once at night and found the place SO eerie, I had never traveled the road again. Until recently.

I am speaking of Mt. Misery Road located in Huntington New York. Mt. Misery did NOT get it’s NAME from the Haunting, it was actually called that from earlier settlers who found the roads too difficult to travel on. Some people say there are UFO’s there. Many have seen ghosts wandering around in the darkness. The road at night is completely dark and very narrow---actually there is nothing to indicate the END of the road except a piece of wood---pretty easy to miss.

There are also reported to be “Men in Black” there. Residents report seeing these men quite often, and they are always spotless….even in the rain they are reported to be dry. History says there was a hospital on the grounds at one time. Some say it was a psychiatric hospital that burned down, reportedly taking the residents with it. In the end, Mt. Misery is best known for “MARY’S GRAVE.” The ghost of Mary who is buried nearby and died a tragic death on the road, she now refuses to leave. She is said to be a being who is earthbound. Say what you will, Long Island has it’s share of Haunted Areas. It’s interesting that many of my photos from that day DID not come out…..hmmmm.

These are the ones that did: The Long and Winding Road... Three Sixes--Painted on the poles The End...No Warning and No Lights.

If you're ever inclined to visit Mt. Misery Road in Huntington Long Island--bring your GPS.  And lights! 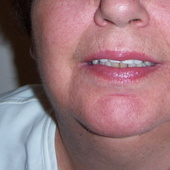 Information on Collegedale, Ooltewah, Chattanooga, Norris Lake Tennessee real estae and activities. Poodles are my hobby so they are here too.