Several months ago (egads, in September) I wrote a blog with a teaser promise at the end to "stay tuned" for more... and that "more" never came. I sure hope too many of my readers didn't lose sleep wondering when I'd ever get back on topic. Here's the post... At the end of the post, I promised to discuss the difference between "touching" and "impressing."

To recap, in our business, we often talk about the need to "touch" as many people as possible with our message, whether those touch-ees are people we know (our Sphere of Influence) or strangers. We get all revved up about volume touching campaigns, to ensure that we get that message out into the world as efficiently as possible. After all, Real Estate is a Numbers Game (blech), so the more people who get touched by us, the more often, the better, right?

Eh. I dunno. First, I'll debate to the ends of the earth whether or not our business IS a numbers game; after all, we get some pretty juicy paychecks and it doesn't take too many of those paychecks to add up to some serious nickels and dimes. We don't need to sell 40,000 houses this year; for some of us, 10 or 20 might pay the bills just fine, maybe 30 or 40. In either case, that means only a few dozen people in our whole city need to think enough of us to entrust us with their precious real estate business.

With me so far? Many Sphere of Influence (SOI) prospecting programs mention "touching" as many of your SOI as you can, as often as you can. However, I want to make a distinction between "touching" and "impressing." I can touch 100 people in a day with a mass email or a postal mailing, pretty easily. And that's fine - it has its place. But what if I also make an effort to impress the people I run into during my day-to-day travels, whether it's business or personal? If you combine the two concepts - a volume "touching" campaign with a concerted effort to make a good impression on people when you have the opportunity, your prospecting results will improve exponentially.

What if you were to impress just one person per day? That's 365 impressed people in a year. Two a week? Even one a week? It sounds pretty obvious, but we get so caught up mass-prospecting that we forget the Power of One - that is - if every person you know refers just one person to you in a year, you'll have a banner year. And the chances of that happening are a whole lot better if everyone you know thinks you're pretty darn cool... instead of simply sort of knowing who you are.

Maybe I should explain what I mean by "impress." You can probably guess that I don't mean "brag about" or "blow away with a fantastic elevator speech." No, by impress, I mean that the person you just interacted with walks away from the interaction feeling just a little bit (or a whole lot) better than he did before. Obviously, he's not saying to himself "Thank GOD I got away - I thought she'd never shut up." Or "That's the last time I answer the phone when HE calls" or "What a flake."

The cool thing about impressing someone is that the positive impression you make on them will stick around a lot longer than the impression you make with a farming postcard, drip email or quarterly newsletter. If someone goes out of their way for me today, I'll still feel good about him for months, maybe even years!

So, take an hour out of your day to impress someone whenever you get the chance. It might be a far better use of that hour than whatever prospecting you'd be doing otherwise... The Savvy Prospector: Eight Weeks to a Full Pipeline for Life

Touching or impressing - whatever it's called, I dont think too much about it. When I have people to call, or people to keep in touch with, or people who calls me for real estate help, I just continue to communicate with them, have just one desire to help and that's it. Whatever happens out of it will be.

Great, I can go back to sleep now that you brought back the topic:)

I totally agree with you and you bring a good point.

what do you do after you impress people?

key thing. . and the difference in winning and losing

If I impressed someone at a party 6 months ago and failed to get a contatc or worst yet. .got contatc info but I did very little about.

A system has to be in place before you go out there to impress people.

Jennifer I agree, touching is important to remember our past clients, but impressing is so much more effective. Building life time clients does not happen through post cards or direct mail. A phone call, a Christmas or holiday card, a handwritten note, lunch are so much more effective to sustaining relationships.

I'll probably write more on this in a day or so, but it seems we real estate agents try to make things more complicated than they need to be. When I say "impress" I simply mean that we take the time to make a good impression on everyone who crosses our paths. We don't need a system to follow up with them or even a plan to do this impressing - just a slight mindset shift to being a nicer, more helpful, more caring person in the midst of our busy days. Opportunities to make a good impression are all around us, but we get busy and distracted and let them slip by.

Loreena - remember when we first met and you said one of your SOI activities was to show up early (or stay late) at a baby shower to help greet and/or clean up? THAT'S a great example of "impressing." Volunteering to watch your neighbor's cat while he goes on vacation. Taking a not-yet-qualified-or-ready buyer out to look at houses, even though they won't be buying for six months. Helping a friend with her website. Helping your friend unpack her kitchen after she moves.

I just love your blogs.  Touching is important!!!  I'm subscribing to you!

You make some good valid points on touching and impressing. Just like some of the agents I  too send out emails and do a follow-up.  That's something we all do but to impress has never really enter my mind from when I started.  So I will make an extra effort to impress someone today. I made a lot sense that you were to just impress one person a day. That's 365 people you can have in your database.  I look forward to getting your Selling with Soul book! Have a great day

When touching is annoying it's not a good thing.  I'll take impressing over than any day!  And I'll enjoy it much more.

Jennifer- I love the look and feel of your package! IMPRESSED!

People in real estate tend to be either  too egocentric or too self conscious ( which actually has to do with ego too in a negative way).

We need to toot our own horns! Huge plus and people in general love to work with famous people and people who exhibit confidence. Impressions are much better than touches.:)

Ann - that's it exactly! I can't think of too many people in the world I really WANT to be "touched" by on a regular basis!

Jennifer - Bravo!!!  Some time ago, in another post, you said something along the lines of "impress the heck out of me".  Granted, the context of this post and the other post were a little different, but the same theory can be applied.  When you impress the heck out of someone, they will remember you!  Isn't that what we want, people to remember us?

I market to my SOI but that's because they already know me and marketing to them just keeps me in their mind.  Even if they don't have a referral for me at the time, some of them will call me up after receiving my mailer to talk and see how I'm doing.  Now that's impressive!  Always make my day.  :)

All the follow up in the world wont be worth the paper or email it is written on, if you dont first impress!  isnt Jennifer super smart!

You touch a ton of people (numbers game) and impress all that you meet, success will follow!

Jennifer, thank you for the distinction between touching and impressing. I think for me when someone "touches me" I often feel "sold to" versus impressed by I have more of a genuine connection, concern than just being another number.  It is a very different approach to business, real estate and sales and I love it!

I agree, it's not just a numbers game. This approach can definitely backfire, I'm with you it's better to impress.

Good post.  Feels a little like a kick in the butt...which is exactly what I need...a good swift kick in the rear!

So I read your featured blog today in AR and decided to check out the other blogs.  You make a lot of sense.  I was actually thinking of the "elevator speech" when you talked about impressing, but as you say it can be much simpler.  This could be one of those goals for a week or two until it becomes habit.

I used to have the touch as many as possible mentality, but it never worked.  I am currently reaching out to loan officers at large backs that DON'T offer the Reverse Mortgage, and when I started I had to hold myself back.  What I mean is that I initially want to get a bunch of emails and blast them all, but I thought twice.  This was my old tactic, and it never worked for many reasons.  So this time I am taking a slow and steady approach, and my new goal, thanks to your blogs, is to make sure I impress them.

I subscribed to you blogs, and added you as an associate.  I hope you will take a look at my blogs as well.  We are both Floridians, and hopefully we can talk more in the future.

Phil - that's it EXACTLY. And I'm working on a chapter in my SOI (Sphere of Influence) book specifically for lenders. So, anything else you'd like to add from your experience would be truly welcomed!

Like Phil above, I am following the breadcrumbs you are leaving. Thanks. 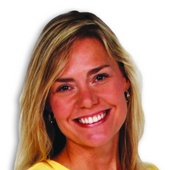