Florida foreclosures up by 71 percent over the same time last year!

St. Lucie County foreclosures nearly quadrupled in April as compared to a year ago!  Palm Beach County remained at approximately the same level, according to RealtyTrac

Nationwide, foreclosures fellbelow a two-year high set the previous month, but rose 62 percent from April 2006 in the wake of falling home prices and the subprime mortgage mess, analysts said.

Florida had the second-highest number of filings in the nation with a total of 14,318 households entering some stage of foreclosure last month, as reported by RealtyTrac. California is No. 1 with 30,505 filings.

Although I am not usually a pessimist, I believe we are only seeing the tip of the iceburg and expect to see a continuing rise the Florida foreclosres.

The formula of record inventory levels, declining prices & all the "creative" financing people jumped into will continue to squeeze homeowners trying to get out from under.

The National Association of Realtors recently predicted that home prices would fall in 2007, the first such drop since the Great Depression.

Florida ranked second in the nation with a sales drop of more than 25 percent in the first quarter of this year, NAR said. Nevada ranked No. 1 at 27 percent.

Of course, all this wonderful news upset the stock market and leaves investors feeling unsettled.

So, will sales continue to fall?  Will Florida actually provide property tax relief?  Will the Fed lower rates?  Oh, and what about those insurance rates & that pesky hurricane season looming around the corner?

I guess we'll have to stay tuned!

The big picture looks bad. I am probably as big of fan of statistics as the next Realtor. However, the biggest statistic is the number of contracts closing, the number of listings (priced correctly), the number of REAL prospects I am working with... Front page story here this morning - EXISTING HOME SALES PRICES RISE 10%. I see that as positive, even if the prices are lower than a year ago. Thanks for the post.

I don't know how I feel about this scenario.

I do not like blaming any one individual... and there was a lot of "creative financing" blamed when the blame could be put in a lot of places...

That being said... I believe some of the Florida issues are specific to Florida demographics.

Mott is right about FLIPs that are killing Martin and St Lucie Counties... which is why I think the Luxury Tax put on flippers is not a bad idea.   In Miami-Dade one issue that is concerning is that there are still "investors" getting high appraisals and walking with cash on these pre-foreclosure properties -there is still enough collusion to let it happen!

Mott also mentions preconstruction... with all the mania to get new construction, we need to remember that a lot of these people that rushed to "affordable" community lotteries like Greystone in Boynton were putting down a MINIMUM of $40,000 of their money, often from HELOCs to buy a house that would not be delivered until the earliest Q1 2008!!  Where are these Affordable Home buyers with that much cash when we hear about foreclosures?  Why is that money not used on existing inventory??

There are a lot of bad currents but I do believe they are correcting in the micro-markets...the macro-market is suffering from some of the woes of the worst micro-markets.

Sorry for the Novella :)

Like
Joe Harris
Morgan Financial - Melbourne, FL
Every one is always quick to blame the Lender and the Loan officer.  While I know there are plenty of brokers out there that have sold many loan products, and not fully explained to the customer what was going to happen to their payment, that borrower was given every disclosure in the world to explain what happens with their loan.  If people would read wha they sign, they might not have been in the situation that they are in.  Also, buyers wanted to buy that new house so bad that they were willing to take these higher risk loans, and overstate their income.  What about the Realtor?  They were forcing loan officers to get the deal done.  However, I still believe the main blame should be put on the borrower.  They should have done more research, read the note, and not lied about their credentials!
Like
Ann Jara
Quail Ridge Country Club Realty, Inc. - Boynton Beach, FL
CRS, e-PRO, TRC, RSPS

Thanks for the great comments.  I would like to point out that I am not blaming lenders for offering creative deals (at least not most of them :) )

Unfortunately, I think a lot of people got caught up in the idea of owning a home that perhaps was beyond their means, not realzing the true implications of loan they initially had,  or anticipating "flipping" before or upon closing on new construction.  For the most part, these buyers are a casualty of buying at the market peak & dare I say a little greed that blinded them to risks they were taking.

I agree with Joe Harris, last year and the year before Port SAint Lucie Florida had a flood of south floridians who were willing to do just about anything to get into the market. Homes that were really worth $150K people were buying for $200K, but that's what the market was calling for and we sold them. But the borrower is the person who many times did not want to know the truth about the note that they were going to carry. They wanted to hear the nice payment amount even though it would drastically adjust in 6months. I dealt with a lot of Mortgage Brokers who were willing to say the truth (like my husband) about the interest rates and the reality of ARM loans, and many did not want to hear it. They went with another Mortgage co who told them what they wanted to hear. A year later they are at the foot of the court house fighting foreclosure. No one puts a gun to your head.  People need to educate themselves before they get into a mortgage that is not realistic to their current financial means. Internet is a huge tool for people to educate themselves on interest rates and Mortgage fraud. We are living in an age of information, use it! 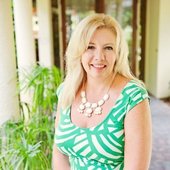