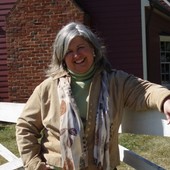 Hi....I am Carol Costanzo your "go-to" source for everything Charlottesville. I know the history and beauty, and the celebrities we attract. I'm unpretentious and highly accomplished. Contact me!

Get to know Carol Costanzo

I have an intense knowledge of the Charlottesville, Va. Real Estate Market. I know the neighborhoods and areas most desired and requested, by locals and the people relocating here. Clients appreciate my no-nonsense approach and my forthrightness about the potential of their purchase or sale. I have a "tell it like it is" policy that is a refreshing change of pace. Clients who are tired of the same old Dog and Pony Show salespeople put on, know that I do not enjoy "selling" per se, or being sold to. I treat my clients with the same respect. What you see is what you get with me. I keep a positive mindset and extremely sincere outlook. I am laid back, and I make this enjoyable for everyone by breaking the stereotypical salesperson model. The fast pace of my business keeps me moving to stay on the cutting edge. I am unpretenious and highly accomplished. Graduate of the Realtor Institute Salesperson of the Year Charlottesville Area Association of Realtors Honor Society Virginia Association of Realtors Honor Society Diamond Club Certified Relocation Specialist

bookmark_borderbookmark
Home Selling – over 10 years ago

How Your Eye Sees is Different that How A Camera Sees: Why It Matters!

Charlottesville is located in the center of the Commonwealth of Virginia. We are home to the University of Virginia, and Thomas Jefferson's beloved home Monticello on Monticello Mountain. We have gorgeous mountain vistas and a very temperate climate.

We have a small town charm and yet a definite sophistication. Our Downtown Mall is the one of the longest pedestrian malls in the nation with stores, restuarants, and many civic activities, including the Fridays after Five concert series. A great way to mingle at the end of the busy work week. We are the launching pad and home of the Dave Matthews Band. There is quite an active music scene here.

Foxfield Races is a steeplechase event with an elaborate tailgating venue which happens every spring and fall. The Univeristy of Virginia has about 20,000 student which pour into our home to attend the University. The Lawn is a long esplanade crowned by two prominent structures, The Rotunda (designed by Jefferson) and Old Cabell Hall (designed by Stanford White). Along the Lawn and the parallel Range are dormitory rooms reserved for distinguished students, Edgar Allan Poe once lived here.

The University Programs Council is a student-run body that programs concerts, comedy shows, speakers, and many other events open to the students and the community, such as the annual "Lighting of the Lawn." One block from The Rotunda, the University of Virginia Art Museum exhibits work drawn from its collection of more than 10,000 objects and has special temporary exhibitions from sources across the nation. It is also home to the Judge Advocate General's Legal Center and School where all military lawyers, known as "JAGs", take courses specific to military law.

John Grisham, Rita Mae Brown, and John Casey are some of our local authors. Charlottesville ranks third in the nation for per-capita book sales, and our love affair with books is very evident in early spring when we host The Virginia Festival of the Book. This festival an entertaining, educational celebration, the only one of its kind in the mid-Atlantic.

Since Charlottesville's early formation, we have been home to numerous notable individuals, from historical figures Thomas Jefferson and James Monroe, to literary giants Edgar Allan Poe and William Faulkner. In the present day, Charlottesville is home to, or has been the home of movie stars Sissy Spacek, Dwayne "The Rock" Johnson, and Sam Shepherd, novelist John Grisham, the poet Rita Dove, NFL Hall of Fame member Howie Long, the rock band Dave Matthews Band, the rock band Bella Morte, the pop band Parachute, and reality TV star Colin Steers, from the Bravo TV show Make Me a Supermodel. Charlottesville was also the home of Anna Anderson, who claimed to be the Grand Duchess Anastasia and to have survived the massacre of the Russian Imperial Family.