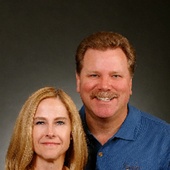 Specializing in Luxury Homes & Custom Home Sites With over 23 years of sales experience in the Fountain Hills area, Gary continues to be one of MCO Realty's top producers.

Get to know Gary & Maureen Glunz

Formerly from the Midwest, Maureen, Gary and their 3 children have lived in Fountain Hills since 1987. Together they enjoy world traveling and time with family and friends.

Career Highlights:
With over 23 years of sales experience in the Fountain Hills area, Gary continues to be one of MCO Realty's top producers. He has earned MCO's Sales Person of the Year Award 10 times over the last 12 years.  Prior to Maureen's career with MCO, she was in the airline industry for 11 years. Customer service is number one on her list.

Mission Statement:
"To treat all my clients the way I would like to be treated, with honesty and integrity."

Beauty surrounds Fountain Hills with Red Mountain, Four Peaks, Superstition and McDowell Mountain ranges. Fountain Hills is home to the world famous fountain. The Fountain Hills Fountain has been in operation since the ’70s. Three 600-horsepower turbine pumps deliver nearly 7000 gallons of water per minute through an 18″ nozzle. Though the fountain is capable of soaring 560 feet into the air, the daily height is generally around 300 feet using two of the three pumps. Hours of operation are 10:00 a.m. to 9:00 p.m. daily, every hour on the hour for 15 minutes.

Fountain Hills became incorporated in 1989. The population is estimated to be 24,669 according to the 2006 census. In the May 2006 issue of Phoenix Magazine, Fountain Hills was named the Best Place to Live in the Phoenix Metro area! Fountain Hills was determined to have the best quality of life of any Valley city when factoring things like median home price, crime rates and school test scores.