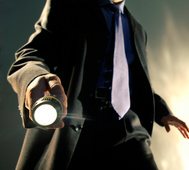 MFI-Miami is an independent compliance company created by the need to determine if a homeowner was a victim of fraudulent mortgage practices on both the compliance and securitization level.

Get to know Steve Dibert

MFI-Miami is an independent compliance company created by the need to determine if a homeowner was a victim of fraudulent mortgage practices on both the compliance and securitization level.

MFI-Miami has expanded its services into white collar criminal defense with an emphasis on bank fraud, mortgage fraud and short sale fraud.

MFI-Miami staff members have given depositions and testified in foreclosure cases in Florida, Kentucky, Maryland, Michigan, New Jersey, New York and Pennsylvania. MFI-Miami team members have been recognized by the Comptroller of the Currency, the Civil Rights Division of the U.S. Department of Justice and have received special recognition from the U.S. House of Representatives.

In 2009, MFI-Miami investigated several properties in the Baltimore Ghetto Loans lawsuit involving Wells Fargo. One of these reports was later featured in a BBC documentary that aired in Great Britain

In 2012, MFI-Miami successfully stopped Wayne County, MI from performing a tax foreclosure on cancer victim, Kelly Parker and her two sons and negotiated a cash settlement with Bank of America due to their negligent handling of Ms. Parker’s mortgage escrows.

In 2009 and 2010, I consulted with the Florida Office of Financial Regulation about wholesale lending. I have given depositions and testified in foreclosure cases in Florida, Kentucky, Michigan, New Jersey and Pennsylvania.

Interviewed multiple times by CNBC and by ABC News

2010, I was quoted in the German financial magazine, Capital and Der Spiegel about MFI-Miami’s ongoing investigation involving Deutsche Bank and the current foreclosure crisis in the US.

I have had several articles profiled by Max Keiser and Stacy Herbert on the website for their London based finance show, Keiser Report on R

I am frequently quoted as an expert in the Huffington Post.

Operated branch offices for various mortgage brokers and correspondent mortgage lenders in the Michigan market being responsible for the day-to-day operations of the office.

Developed and managed a team that specializing in loans originations from clients in foreclosure, land contracts, or Lease-Options

Ensured that all loans complied with federal and state regulations.

Prepared loans to be sold on the secondary market