Who knew?  Philo T. Farnsworth, the inventor of TV, set up shop right here in Fort Wayne.  Want to see where he lived?  Just go east on E. State Blvd a few blocks to the corner of St. Joseph Blvd & E. State.  There you'll find the beautiful historic home of Philo himself!

According to Wikipedia (which of course, is absolutely accurate!):

"In 1938, Farnsworth established the Farnsworth Television and Radio Corporation in Fort Wayne, Indiana, with E. A. Nicholas as president and himself as director of research.[26] In September 1939, after a more than decade long legal battle, RCA finally conceded to a multi-year licensing agreement concerning Farnsworth's 1927 patent for Television totaling $1 million. RCA was then free, after showcasing electronic television at The New York World's Fair on April 20, 1939, to sell electronic television cameras to the public.[22][26]

Farnsworth Television and Radio Corporation was purchased by International Telephone and Telegraph (ITT) in 1951. During his time at ITT, Farnsworth worked in a basement lab known as "the cave" on Pontiac Street in Fort Wayne. From here he introduced a number of breakthrough concepts, including: a defense early warning signal, submarine detection devices, radar calibration equipment and an infrared telescope."

I'm Chris Sanderson, Fort Wayne's own "Tech Savvy Lender," with Ruoff Home Mortgage.  As a life-long resident of Fort Wayne I continue to be amazed by the hidden treasures right here in our home town.

Groups:
VBloggers
31 Days of May Challenge 2011 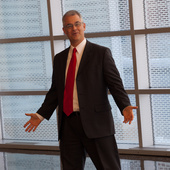