Last week we adopted a 78 lb german shepherd, 8 years old, with a very mellow disposition. His name is Veeru. The next day, the first order of business was to build a doghouse at the acreage. So I went to the library of google for some dimensions. After reviewing a number of plans, I came to the realization that I needed dimensions suitable for our doggie and not just generic plans. The formula that I settled upon was as follows:

I had stockpiled 1x6 planks from an old wooden deck that I had replaced years ago. So I decided to recycle these boards into the new doghouse. I carefully removed all the old nails in the planks, and chose dimensions that would allow me to cut-out the rot and still have suitable lengths. I manufactured every side separately and used exterior grade deck screws to put it all together. I really had my doubts at one point as the final product appeared huge. I built the entire structure elevated 18 inches off the ground, using log stumps as the corner posts, with a 12 inch high stump for a front step. The roof is flat and the top is covered with a heavy-duty poly tarp.

I then went to the local animal feed store for a bale of hay for the bedding. As it happens, Veeru loves the smell of hay. As I was placing the hay, Veeru literally nosed his way into the doghouse and happily began munching on the hay. He couldn't get enough of it. After he settled down, he was in heaven. We now have no problem getting him to go into the doghouse. It's like a natural fit.

So dear reader I leave you with the above dimensions for your consideration, if you ever have to size a doghouse. At least for our Veeru, it was love at first sight. As realtors would say... "It oozes rustic charm, a bedroom with a view and weathered wood siding to die for." 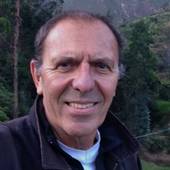