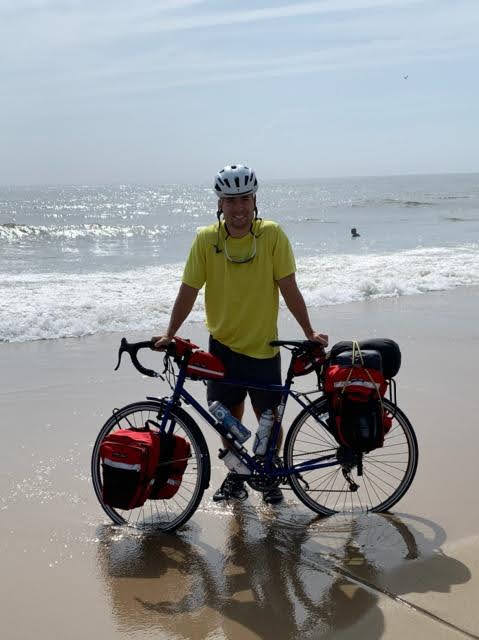 Will Armstrong , son of Bill Armstrong the former NAR Treasurer , is biking from the shore of the Atlantic Ocean to the Pacific Coast in Seattle Washington to raise money for ALS , aka Lou Gehrig's Disease. Will recently graduated from the University of Maryland and decided now is the time to fulfill a life long dream of going coast to coast on his bicycle and help raise money for ALS research in memory of a good friend and mentor Rodney Lapp who passed away in 2019.
Will started his journey at the end of June leaving Rehoboth Beach Delaware. He expects to arrive in Washington State in early September. You can follow Will's progress and route on his website  & daily blog "Against the Wind"
Anyone in the Active Rain community or individuals who may live near his route, on his site he encourages those who may have a suggestion or connections for a safe place to stay to reach out to him. ALS is a cause that is near and dear to me. When I was about Will Armstrong's age in the mid 1980's my Mother's sister,  Aunt Betty Jean Ferguson Underwood passed away as a result of a long grueling battle with ALS.
Please consider helping Will reach his Go Fund Me goal for funding ALS research. Groups:
Around The Water Cooler
Give Back
Inspiration !!
Out Of The Box!
The Lounge at Active Rain

Hello Buzz - thank you for sharing Will's story.  Best of luck to him on his journey as well as helping raise awareness(and much needed funds for this disease) as he bikes across the country.

Hi Buzz- I admire people like Will who do something about a cause!!! Best of luck to him. I'm going to check out his site.

Buzz what an awesome post for such  a great cause, so glad Kathy Streib  reblogged your post so I would not miss it, Endre

The more exposure Will can get especially to anyone along his route the better. Thanks for the reblog Kathy Streib !

Buzz Mackintosh - I can tell Will is a good man with a big heart. The cause is worth it! I wish him well, good weather, and safety. I can't even imagine doing what he is doing. The most I ran in my younger years was from the Mississippi River in southern Illinois to the Ohio River. Compared to Will, my run was nothing to brag about.