What can be accomplished when it RAINS for 40 days and 40 nights? Well, for one thing, you have a FLOOD!
This past week-end, I reached my 40th day (and night) of blogging, reading posts, commenting, hunting for graphics, and researching material for posts.

Now - 40 days and 40 nights later.......what are the results? Well, some can be measured and some cannot.
Below are some of the MEASURED results:

#1 - A five part series on "Three Secrets to a Fast and Easy VA Home Loan Experience" ; and,
#2 - A six part series on "Having a Star Spangled Heart to Serve Those Who Serve". 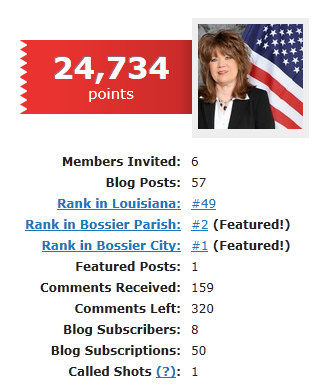 WHAT?!? More than the POINTS??? What about the SUCCESS which cannot be measured with points? Here's my REAL success story on Active Rain - and yes, it was a FLOOD! The very first post I made was on Memorial Day. This set the tone and focus of my presence on Active Rain - my passion for serving the men and women of the United States milary. The very first comment I received on Active Rain on my very first blog was from a member of AR that I have come to greatly admire, Cindy Jones of Virgina.

My first FEATURED post, "Honoring Our Troops - Paying it Forward? Heck No! Paying it Back! was a contest I held on the 4th of July with an opportunity to win a pair of combat boots with proceeds going to help wounded warriors (www.BootCampaign.com). Little did I know that the winners and the stories would touch my heart so much:

How could I have imagined that Cindy Jones, my first commenter on my first blog, would be one of the winners in a contest I held on the 4th of July honoring wounded warriors! Or how could I have known that Cindy was a widow, whose husband was killed while serving on foreign soil. See Cindy's response when notified of winning:

"........Is there a way to denote the boots?  My donation would be in the rememberance of my husband William Jones who died on Active Duty in the Middle East.  I would wear them with pride but also know that I am fortunate to be able to afford a new pair of shoes and there are those who can't.  Just let me know and thanks for bringing this terrific program to my attention."

And the other winner in the boot contest, Tish Loyd, the widow of Viet Nam veteran, Frank Lloyd, who died of service-related injuries. Tish did not want the boots for herself - but for her 13 year old grandson, Stirling, who (in her words) "....has a great respect for our military and would wear those boots with more pride than you could shake a stick at...."!

The points are cool and I'm so competitive.....well, I love it! AND I love reading and writing and commenting here on Active Rain.

BUT there are some connections - like the ones above with Cindy and Tish - on which you can't put a "point value". These are the connections I will treasure forever.

FORTY DAYS AND FORTY NIGHTS OF RAIN! I love the flood of connections! NOW THAT IS TRUE SUCCESS!

Show All Comments
Peg Barcelo
Fluff My House! Home Staging Inc. 250.486.6369 - Summerland, BC
The FlufftasticStager from Summerland, BC

Louise what a great post! Your stories touched me greatly! Continued success, I can see why you have joined the group AR Rockstars! Welcome to the Rain!

Thansk, Peg, for your encouragement!

Jeanne and Ralph - I will be pressing you!  Like I said - I am COMPETITIVE!  Loving it!

Thanks for the comments!

Louise ~ Thank you so much for the mention.  The boots for my Grandson arrived today and as soon as I can get up to the beach with him, I'll have a picture to share.  He likes the pictures of all the different folks wearing their boots while wearing their "regular" clothes.  Since he's an avid fisherman he wants to wear his gear and boots for the picture.  I hope the Mother and boys you ordered boots for are already enjoying theirs!  Thanks again for bringing this fantastic organization to my attention!

Louise-if the boots arrive before I head on my vacation I'm going to get a photo of my grandson, named after my husband, wearing them.  Can't think of a better way for them to be shown off but by the love of a grandson who won't get to meet his granddad but carries his name.

Cindy and Tish - you two are the reason for any "success" on AR that I have.  Thanks for serving the ones who served.  Love to you both.

And Cindy - PLEASE send me a copy of that picture when you take it!

Louise what a great post.  Thanks so much for all you do for our military, we truly do owe it all to them.  You are an inspiration.

Contact Me
Interested in using your VA benefits? Contact me for information on how you can purchase or refinance today!
Louise Thaxton
Call: 866-960-8115
Real estate in Bossier City