Here is an article from CNN.com regarding high end renovations to kitchens and bathrooms. I maintain that in this economy, the small things are what turns heads and catches a buyers eye right now. We are all in a slump, so put your efforts into smaller upgrades or maintenance rather than massive renovations.

High-end kitchen and bath renovations just aren't boosting a home's value the way they used to. Sellers who succumbed to home over-improvement syndrome are feeling the pain.

NEW YORK (CNNMoney.com) -- The granite countertop's glory days might be over.

During the housing boom, updating a kitchen with high end materials like cherry wood cabinets and a Viking stove was a sure bet to boost a home's value. Homeowners often recovered about 80% of the cost when the house was later sold.

But with so much more inventory on the market for buyers to choose from, they just aren't as impressed with the bells and whistles. Now most upscale renovations are returning less than 70% of their cost, according to a recent survey from the National Association of Realtors (NAR).

"Pay-back for high-end projects has declined over the past few years," said Kermit Baker, chief economist for the American Institute of Architects (AIA). "People planning to sell shouldn't over-improve," he said. "They won't get the money out if they sell in the next two or three years."

NAR's survey revealed that returns on investment for a wide range of high-end interior redecorations dropped in 2007. An upscale bathroom renovation cost an average of $50,590, nationally, but only added $34,588 to house value - a 68.4% return. In 2006, a high-end bath renovation returned 77.4% of its cost.

Many owners simply went too far amidst the mania, over-improving their homes beyond what the local market would bear, according to Darius Baker, a veteran Sacramento, Calif., contractor.

In the past his clients were more likely to opt for expensive redos even if they were planning to move, since they knew they'd recoup most of their costs.

"I definitely saw a lot of tract houses built in the 1970s, in developments with three basic floors plans, get expensive renovations," he said. "We did a lot of radical projects, moving walls around, installing granite counters instead of Formica and cherry wood cabinets instead of oak."

The numbers made sense. In 2005, a fancy kitchen renovation on the West Coast returned an average of 93% of its cost. Even if the owner got only a year or two use of it, the close-to-break-even return made it worthwhile. By 2007, the return had declined precipitously to 74%.

Today, people who are moving out soon, Darius Baker said, "are not looking to make the place a Taj Mahal." They're just doing enough to make the house presentable.

In the current environment, owners are cutting back on upscale renovations, according to Fred Ugast, chief operating officer of HomeTech, which supplies cost statistics for NAR's annual Cost vs. Value index report.

"We're seeing a lot of pull-back in the high end," he said.

A separate report from the AIA also found demand for luxury features waning in 2007 according to the AIA. The popularity of high-end appliances declined from 65% to 47%. Demand for larger pantry spaces went down from 64% to 51% and wine refrigerators fell from 53% to 49%.

Still, people are willing to spend on their own comfort. Most of the high-end jobs that Darius Baker is getting are for clients staying put for a long time.

"They're saying, ''I'm not concerned about the price because I'm not leaving until they carry me out,'" he said.

And returns for high-end exterior renovations are still holding up, according to the NAR report, with better pay-offs than interior work.

For example, sprucing up a home's look with expensive fiber-cement siding, which looks like wood but is more durable, returns 88% on investment, more than any other renovation NAR evaluated.

"It could indicate that curb appeal is even more important than in the past," said NAR spokesman, Walter Molony. "It might get the home more serious looks from buyers."

Mick De Giulio, of Chicago-based De Giulio Kitchen Design, also senses a downshift in the market. "The high-end is still strong, but there's something in the air," he said. "I just finished jobs for two very high-end clients. We put kitchens in their new homes, but they can't sell their old ones."

VISIT WWW.PROPLAYERSREALTY.COM FOR ALL OF YOUR TALLAHASSEE, FLORIDA REAL ESTATE NEEDS! 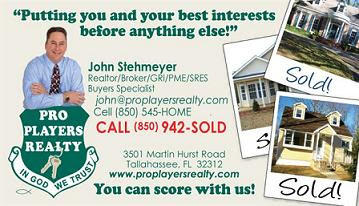 John will make your best deal buying and selling!

At Pro Players Realty you are family and You come before work!

This message is not intended as a solicitation to any individual whose property is listed exclusively with another broker.

We want you to get the BEST real estate service possible. We help people buy, sell and lease commercial and residential property in Tallahassee, Florida and beyond. We are Dedicated to your success and spend extra time from the start to the finish on your behalf. We are a very personalized company and work largely by referral from satisfied people. This is how we invest in our customers at Pro Players Realty USA: Initial consultation- discover exactly what our customer wants to accomplish, and come up with a detailed plan to achieve the best results. Assign the best suited team for the customer’s transaction. All our agents have a team working with them to assist in the process. Our buying and selling processes are designed from careful planning and combined experiences. We only want to do what works in today’s market. Call us at 850-942-SOLD (7653) today.