Calexico is a border city to Mexicali, Mexico and is known as the "gateway" to Mexico. The name Calexico derives from the words California (Cal) and Mexico (exico) put together to create a unique city name. 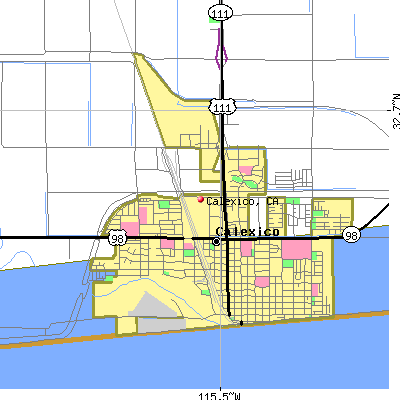 Calexico began as a tent city of the Imperial Land Company and has grown into a larger thriving city on the US-Mexico border.

Before the repeal of prohibition, Calexico was primarily a week-end town visited by workers in the Imperial Valley in pursuit of fun and games, dance halls and saloons, in adjacent Mexicali, which was outside the United States and unaffected by the Volstead Act.

Although it gained a reputation for a while as a typical U.S.-Mexico border town with all the tawdry aspects usually associated with such places, the modern city of Calexico is a far cry from what it was back in those early days. Hundreds of acres are now being devoted to industrial parks use and commercial and retail incentives are being offered to encourage industrial development.

Since Calexico represents the mixing of two cultures and areas and because of its proximity to the Mexican border, the name Calexico was coined for a combination of Mexico and California.

Calexico is located 230 miles southeast of Los Angeles, 125 miles east of san Diego, 260 miles west of Phoenix, and adjacent to the City of Mexicali, Baja California, Mexico. Calexico's location provides easy overnight trucking access to all those transportation hubs plus the ports of Long Beach, and Ensenada, Baja California, Mexico Calexico's strategic location is seen by many as the prime link between the interior of Mexico and the major markets along the west coast of the United States and Canada.

For more information about Calexico, please contact me www.IVForeclosures.com/a>

For more information about Calexico or the Imperial Valley, please contact me http://www.IVForeclosures.com

Good to have you on Active Rain.  This is a good site for gathering information and interesting to see what others are blogging about. Contact us if we can be of service to you. We would be happy to send you a referral or to take good care of any referral you would send to us.

Greetings Mr. Painter, I hope all is well with you.  I appreciate the outreach and contact.

If I can be of any assistance to your clients relocating Imperial County, California or Calexico, please keep me in mind and I will do the same.