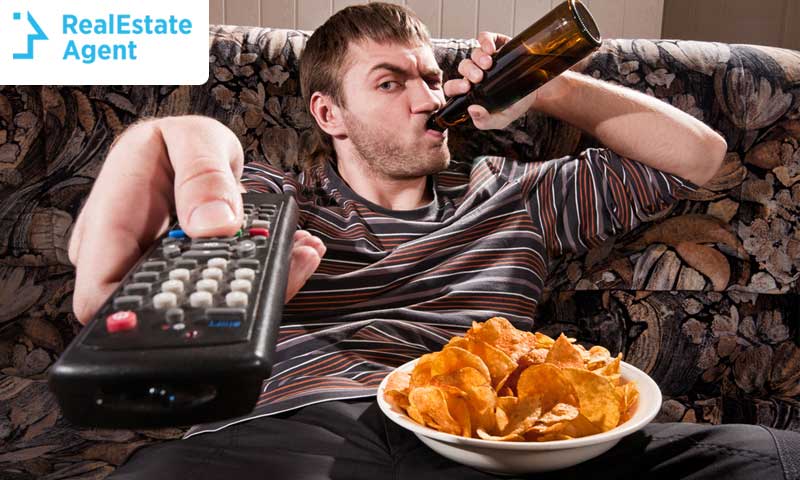 Last month our team at RealEstateAgent.com wrote about She Sheds, the ultimate place of retreat for women out of the household. Well, males also have their version: the man cave!

But it is a very different concept if you think about it. While She Sheds are a separate “entity” from the house, this manspace called “Man cave” is a transformed room inside the house. Funny: Sigmund Freud, founder of psychoanalysis, use to say that the female gender is retreated and expresses itself interiorly, while the male expresses itself externally – but, when it comes to their personal space, that notion is reversed. Maybe it’s a context based on an outdated (not to say sexist) concept that dictates that women are to stay at home while men go out there to hunt; so, when they want to have a break from it all, they naturally go away from the place they normally spend the most time.

But anyway, that’s not the discussion here. This article is about that sweet spot of the house where males mark an “off limits” not only to their spouse and offspring but also to normal coexistence rules. A man cave is a “sacred” place where men can do as they please. No need to conform to house rules of cleanliness and manners. Want to watch football in your underwear, drinking beer and eating chicken with bare hands, feet on the coffee table, burping, farting? In the man cave, you can! Don’t want to organize the place afterward? It’s your manspace, you’re the only one who’ll live with it! Whatever!

The most commonly used spaces for a man cave are garages, basements, and attics. Since it takes one room away from the rest of the house, it’s good to look at its implications. An attic is a very secluded space; the fact that people will need to climb stairs to bother you, just makes them give up doing so. That’s good, but attics usually make noise to the people downstairs and if you find yourself having to think about your kid’s/wife’s sleep or visitors hearing your activities… what’s the point? Plus, if you’re lazy, you might give up going up there yourself. The garage is good, but will you leave the car outside providing an opportunity for burglars to steal and weather to depreciate it? Even if your garage is big enough to host both your manspace and the cars, you’ll find yourself having your space invaded by other people that want to use the garage. Which leaves us with the basement. This one, we think, it’s the ideal place for a man cave. It preserves both your privacy and the rest of the house’s without taking up useful space. Sure, the wife might want to use it as a laundry room; but the washing machine can be easily installed somewhere else – like the garage.

From a real estate point of view, She Sheds are definitely more valuable, as they create a room, rather than adapt one. Why? Say you’re selling the home. Your manspace might be appealing to the home buyer if they like some of your items – a gaming station, a pool table, a jukebox… -  but you might want these items in your new place, right? See; that’s the thing: a man cave is more about the items inside of it than the place itself. It’s just a room! That’s why many men have joined the shed craze and created their man shed (or is it a he shed?). This way, they can create their manspace while still adding value to the house. So, if you got here because you’re researching home improvement to increase your home value, build a man shed out of the house!

Some man cave are thematic; it all depends on the use of the manspace. Here are a few man cave ideas to inspire you:

Have a bunch of liquor with nice man cave bar furniture (like a countertop with stools) so you and your buds can drink some Buds!

How about a billiard table? Or a ping pong table? Or an air hockey table?

If you don’t have too much space, get a nice pinball machine, a dart station and a table for board games. You can invite friends to play with you, or have fun by yourself!

Do you love music? Playing and hearing? Get a jukebox, cool music memorabilia, install nice speakers and/or amps for guitars (or whatever your instrument of choice), shelves for all your records and comfortable seating. This man cave idea is all about creating a great environment where you can relax to the sound of music.

Go high tech. Have a big TV and a gaming rig complete with home theater and other man cave gadgets so you can play with friends (online or in real-life) video games and watch TV. Notice how these man cave ideas are good for alone time but also for sharing? You can invite whoever you want; even your wife -- why not? It depends on you; you’re the boss.

Go crazy with more manly gym objects. Besides a treadmill, get some boxing sandbags and weightlifting rigs to build a sports man cave that will blow off your steam and get you fit.

If you like building stuff, have a large place equipped with table saws and 3D-Printers where you can break and build stuff. From all of the man cave ideas this one is the one most useful to the house. The one who’s not only passive fun; you’re actually creating something to the house. But learn how to reduce noise pollution, otherwise the people in your house will - understandably so - hate your manspace and advocate against it.

Have you looked at those man cave ideas and thought “that’s very much a boy cave idea?”. Well, part of it is actually that: a “back to roots” place. A room where men can go back to a simpler time where they can have some fun uncensored by the grown-up world.

If you felt these man cave ideas didn’t fit you, come up with man cave ideas that do! Think of the activity you see yourself doing the most in your manspace, and build it from there.