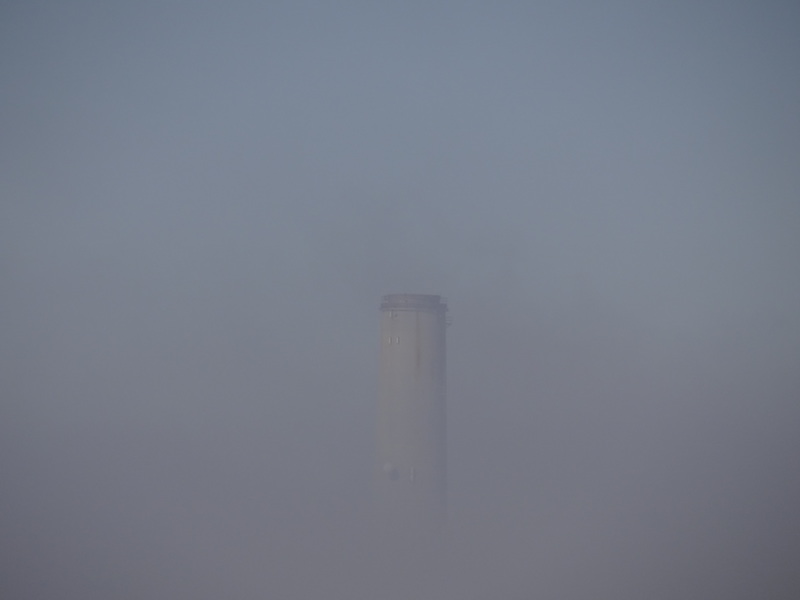 The Encina Power Station - Soon to be Only a Memory

The Encina Power Plant, with its very obvious smokestack, has been an iconic landmark on the Carlsbad seacoast for decades. It was constructed in the 1950s and was officially retired in December 11, 2018 and is being dismantled - the demolition began earlier this year. The new power station, the Carlsbad Energy Center, began operation on December 12, 2018. Whether you like the look of the plant and the towering smokestack or not, it certainly grabs attention, and can be seen for miles from the freeway north and south, and other inland vantage points.

And of course beyond being a part of Carlsbad's history it's provided electricity for thousands of homes all these years. Some residents are happy to see the power plant disappearing, while many others are rather nostalgic about it.  It will certainly change the look of the Carlsbad Coastline. The Encina Power Station will soon be just a memory, preserved in our minds, and in numerous photos.

But in case you want a very different kind of memory, Carlsbad resident artist, Bryan Snyder (founder of the Carlsbad Art Wall in 2015), has created a hand-crafted resin sculpture of the Encina Power Station, available at his gallery and online ($30 + tax, and shipping is available). It's a pretty cool idea..and I hear it's been very popular.

Wow! From an outsider's perspective, one who has never visited the area and is unfamiliar with the smokestack, I would say: good riddance, that looked like an eye-sore.

However! I totally get the nostalgia, too. It will feel like something is amiss for quite some time for all who are so used to seeing it sitting there. Thank you for sharing this cool story and the pictures Jeff.

That was my opinion when we first moved here and I saw it. But after you live with it for a while...

Hello Jeff - a longtime North San Diego landmark.  Maybe not a universal favorite but well-known to those who passed by it on a regular(or semi-regular) basis.  I have been gone from the area for the many years and still remember it.

Jeff Dowler, CRS good morning, Jeff... I'd probably be nostalgic for the landmark, myself, even if it's not especially attractive.

It's kind of neat to see things change over the years, but some things we just get so used to seeing that it is difficult to get used to life without them, haha.

I like seeing this type of change.  You can appreciate the coastline even more.  Happy Thursday.  A

Good morning Jeff! Yeah, it's funny, I know it is just a smokestack, but with my memories of living in the region, it holds fond memories for me.

Thanks for the kind words Laura Cerrano

No not a universal favorite but certainly well known Michael Jacobs I bet many hadn't given it much thought until it was time to be demolished...and they see how the coastline has changed.

I suspect that's the sentiment of many Nina Hollander, Broker

Wow, Jeff, lots of history that will be gone soon and a landmark I am sure for some boaters.

It definitely changes the look of the coastline, and once the building is gone it will look different once again. I got used to seeing it but have to admit I found it a bit unappealing when we first moved here.

I get that. I bet there are many with fond memories, for various reasons.

Yes, a bit of history is leaving Carlsbad, and I imagine it WAS a popular landmark for boaters for years! It can be seen for many miles.

I just came back to look at some of this photos that I missed and they are pretty brilliant!

Yes I remember driving by and seeing the Smoke Stack.... so it will be history? I guess future blog post material for Throwback Thursdays:)Endre

Good morning Jeff -  hopefully the new power plant has more capacity for the growth since the 1950's.

Hi Endre Barath, Jr.  The smokestack itself is already gone and the station will be too before long.

My understanding is the new station can provide more electricity and that it can ramp up quickly when needed to deal with high energy use on the grid, say during heat waves...not something the former station was equipped to do.

Jeff Dowler, CRS  It is strange when landmarks disappear  from our skylines