Home > Blogs > Tammy Lankford, > Lake Sinclair: we love it, we know it, & we sell it
bookmark_borderbookmark

For such a happy time in our family (the birth of my new grandson) there have been an awful lot of tears and stress... Let me back up to Christmas...  we were careful because we were gathering with family members. Christmas eve was at my daughter's house, her family of 3, Don and I and my parents were there.  Cooper had a blast. It was a great day. The next day was at my parent's house and my brother was there, but Abigail's husband had to work.

Well a couple of days later is when Covid finally caught up to my family.

My son in law got it at work on Christmas Day.  Of course he didn't KNOW he got it until January 1st.  That's when he got sick and went to the ER.  Immediately the rest of the family went and tested.  All clear.... until we weren't.   The fact is by the time we tested we were exposed and it was just a matter of time until the symptoms hit. My son in law quarantined at a friends' vacant house, my daughter cried a lot, her c-section was postponed, then finally my son in law was doing a little better and they went off the hospital on the 8th of January to have a baby.  On the 9th my little Cooper who was two and half woke up with Covid symptoms.  And that's when Grammy and Papa got sick.  My grandson was feeling better on day 3 or 4.  A few popsicles and he was all better.

Grammy and Papa however had more of a rough go of it. We got sick around the 11th and 12th of January and frankly yesterday was the first day since the 14th that I was fairly certain it was not going to kill me.   There are not words to describe trying to get your breath and not being able to do so.  Fortunately my parents and my baby brother didn't get it.

My little MJ will be three weeks old on Friday and I still haven't held him yet.  Maybe in another week.  Of course my first priority is protecting him. I do some facetime with both my little guys every single day.  And today I'm going to share a sweet photo of the two of them with my AR family.

Hope you all are well.  Did anyone miss me?

Falling ill isn't fun regardless of the illness. I'm thankful that I'm one of those who just doesn't develop the most common of illnesses, not even a "common cold."

That said, I don't wish any type of illness on anyone. The only 2 times in my adult life that I've been seriously ill (pneumonia in 1976 and severe flu in 1988) wasn't enjoyable.

Nevertheless, I'm very glad to know that you and your entire family, including its newest member, are healthy. (Prayers do work.)

Christine O'Shea yes, it was a crazy start to 2021 for sure

Gwen Fowler-864-916-2019 SC Mountains Lakes Homes I feel like it will soon be behind us but it's taking it's time getting there.

Ken Jones I too am generally speaking a very well and healthy person.  In my adult life I had to have my tonsils removed, and eventually my gall bladder, but I don't have any kind of chronic illnesses and honestly my parents in their mid 70s to 80 don't either.   That said, this totally wipped me out for a week. I certainly am glad that I am on the mend.  Being back at work has been good for me I think.  I will be thrilled if/when my smell/taste return to somewhat normal.  That has been so weird.  I can taste salt and sugar but nothing tastes like normal.

Tammy Lankford, I've had several friends who've had encounters with Covid. All survived, including a 70-year-old lady friend who very recently had radical mastectomy surgery and underwent extensive chemotherapy.

All said the same as you; that it wiped them out for about a week.

Glad you're back at work. It's important to keep those wheels moving.

My best to you and your family.

Ken Jones my 71 year old uncle had it this past summer and was briefly hospitalized, but never on the vent.    And anything like with your lady friend who was immune compromised from surgery and chemo it can make it really come at you.  I feel like my immune system was probably a bit compromised from stress.... my daughter having Covid while giving birth was a stressful few days for me as a mom.  Stress is the one thing I haven't always succesfully managed in my life.... when it's out of my control I shouldn't stress over it, but I still do.

Yes, I sort of left a message. He said you were sick. I called Thom Abbott instead.  He was very helpful and the q applied to his geography (as it turns out and I now understand). I'm glad your parents are okay.  my friend (who is only 27) had seen her grandparents just 2 days before she showed symptoms and she was being very careful, but she was concerned about that.  My parents were signed up to get the vaccine on Feb 8th, but that appt got canceled. But hopefully soon.

Tammy Lankford, Ironically, my 70-year-old lady friend was the only one of my friends to had Covid that didn't complain of anything other than a fever for a couple of days and being fatigued for about a week.

Seems as though she would have just blown it off as a mild flu if not for all the hoopla in the media.

As for stress, it will definitely do more damage to us humans than almost anything else. That insidious problem does serious immune system damage which opens the door (so to speak) to a wide variety of health problems.

Glad you're doing well. And, do your best to relax your mind - it's more important than relaxing your body.

And, don't worry too much; it NEVER solves anything.

I am so glad you are doing better and on the mend.  Take care of yourself and those you love.

Yes you were missed.   and I am glad that you are on the upswing.  We are lucky that it has ONLY hit 25 million people in this country because it is definitely out there and vicious.

Having nursed my mom through covid where she had to be on oxygen, I saw firsthand the panic of not being able to catch your breath.  I am so sorry that you had to go through this.  Good news, you've had it and you recovered.  So did the whole family.   You are unlikely to get it again for the foreseeable future while your anitbodies are there.

Each day will be better from here on.

June Piper-Brandon hopefully soon I can take care of others again... right now I'm struggling to take care of me and business.

So glad you are getting better. So many people have been ill and everyone seems to recover differently.

So glad you are better. You're missed when one day passes, much less three weeks without you. With ratitude for your recovery, Lynn

Christine Bohn thanks.  I was so super exhausted and that's definiately a new feeling for me.  I've to this point had no issues keeping up with my toddler grandson. Thursday will be my first day keeping both kids at once.  I think I'm taking Donald with me for backup.

Paula McDonald, Ph.D. I just chatted with someone who had it this past summer and they said their "tiredness" lasted about 7 weeks.  And we're a similar age group. But I feel good at having gotten "through" the tough part with no drugs because I truly believe that's why some people are having long term issues is drugs.

Lynn B. Friedman I will be glad to feel "normal" like myself again and am hopeful that will happen soon.  I still feel like my lungs "shrunk" and don't hold enough air.  I had never had to "think about breathing" before and that's a very strange feeling.

Lynn B. Friedman you know I didn't notice until someone else pointed it out.  I need to write a post about that journey.  And while I have really good mornings I am "hitting the wall" mid afternoon still.  So my right now goal is "get through the entire day" and then I'll work on my normal feisty. LOL  But hopefully soon.

Your story is a good reminder for all of us to be very careful.

I hope every member of your family will be well.

Roy Kelley careful doesn't always cut it.  My son in law and daughter who are a paramedic and nurse have been super careful both at work and their procedures coming home (clothes straight in washer/ shower before touching anything in the house including the children) and it still happened. 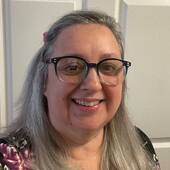