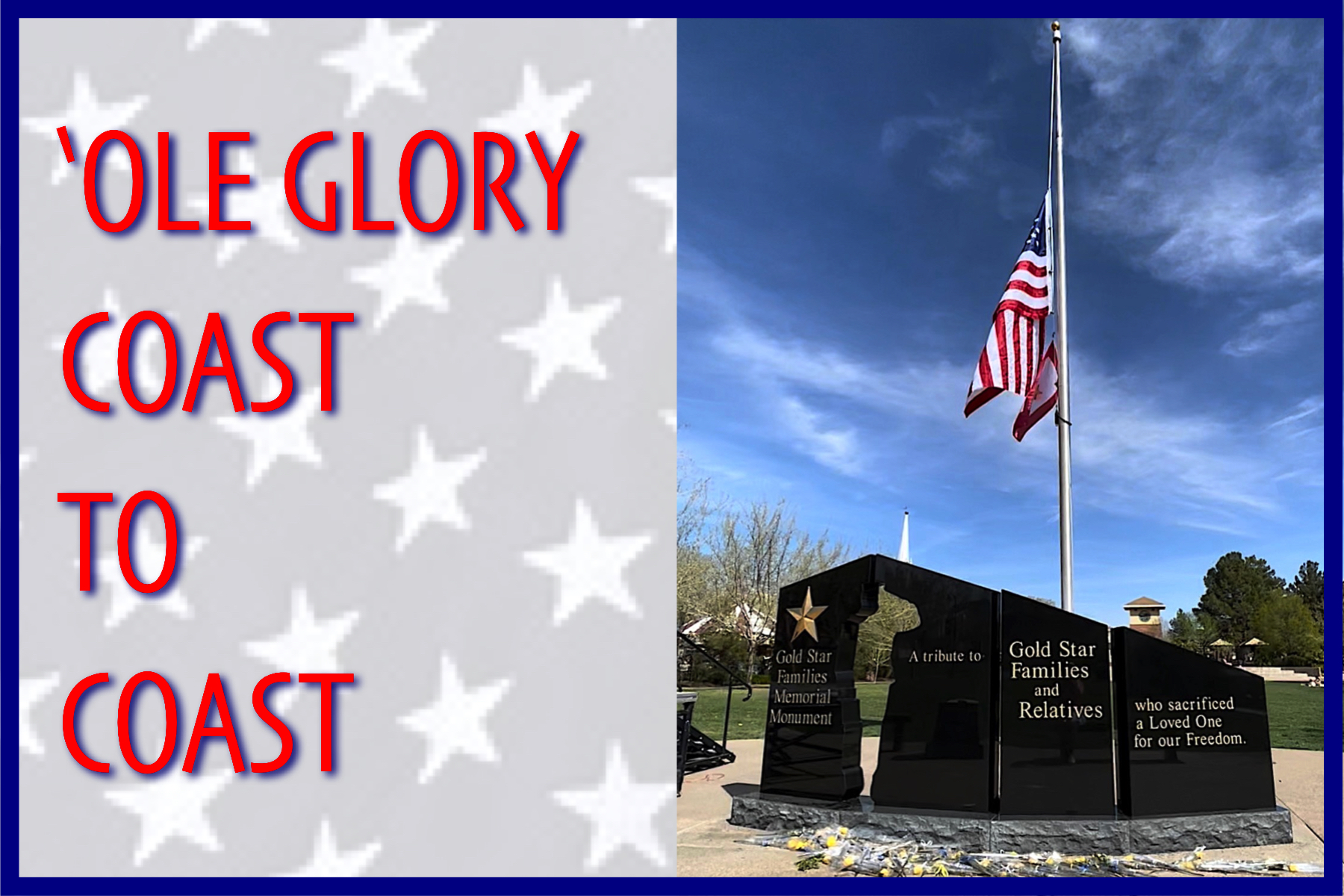 Recently, I had the honor of attending the Gold Star Monument ceremony that was dedicated to all families that have lost an immediate family member while serving the military. It was held March 26 at Historic Town Square. The U.S. flag hung at half mast in honor of the reverent occasion.

My aunt was a double Gold Star recipient. Her husband, Robert Edwin Graves, an Army Sergeant was held POW and perished in the Korean War, his only son, Randolph Edwin Graves, Specialist E-4, a helicopter gunner was killed in action during the Vietnam War while on a mission.

“We hope this will inspire people to talk about the price of freedom, and the responsibility we all have as beneficiaries of those freedoms,” Mayor Randall added. “It reminds us that some gave all, and that it is our solemn duty to honor their sacrifices by lifting our community every chance we get.” Gold Star Families was established by Hershel “Woody” Williams, the last surviving Medal of Honor recipient from World War II. On February 23, 1945 — the fifth day of battle on Iwo Jima and the day of the famous flag raising — Williams stalked hostile Japanese gun emplacements and took them out with his flame thrower, saving countless American lives in the process. His actions over the course of four hours under heavy enemy fire earned him the Medal of Honor.

His foundation forged a national effort to provide a place for Gold Star Families in recognition of the sacrifices that military people have been made for our freedom — and to ensure that we never forget.

This program is active in all 50 states and one U.S. territory with 90 monuments, 85 monuments in progress, as of mid-March 2022. This is a place, where family members can visit, sit and reflect quietly.

This is an entry to 'Ole Glory Coast to Coast' - June Active Rain Challenge. Many thanks to Mark Don McInnes, Sandpoint-Idaho and Endre Barath, Jr. for hosting this month's challenge!

Groups:
ActiveRain Challenges
Be The Best In Your Field
Diary of a Realtor
POSITIVE ATTITUDE for the Weary Soul
Support Our Troops Friday

Good morning Wanda - I really like the back story of the display of Old Glory.  They found and died to defend it.

Good morning Wanda Kubat-Nerdin - Wanda Can! thank you for sharing a sad and yet touching story. Gold Star Families have sacrificed so much for so many.

Am glad the community of southern Utah has provided a place for families to go to reflect the loss of their loved ones, Nina Hollander, Broker. It is quite beautiful!

You are so welcome Roy, this is something worth sharing with everyone!

A military person gave me a commemorative coin honoring the occasion after I told him the story of my uncle and cousin dying in wartime, I was very grateful. I sent it to my cousin in Georgia, who is the last living immediate family member to both of them. It's the least I could do for her, Dorie Dillard Austin TX.

I wish more younger generations knew the sacrifices that have been made so they can be free and make their own choices in life, Grant Schneider. Thank you for stopping by!

Recently, I read the touching story of  14-year old Dan Bullock, who forged his parents signatures to join the military. He was so excited and unfortunately his life was cut short in Vietnam at 15 years of age. He is a true hero who truly made a difference in this world but I stop to wonder what he would have become had he matured and discovered his full potential, Leanne Smith.

Very nice Wanda and thank you for attending at pointing this memorial out. God Bless the USA.

Thank you so much Jeff Masich-Scottsdale AZ Associate Broker,MBA,GRI, these memorials mean something personal to those who understand the enormity of loss. Yes, God Bless the U.S.A.!

Hi Wanda- I love your entry in this month's challenge!! I am familiar with Gold Star families but was unaware of the Memorials there are throughout the country.  I'm with you, Wanda...I wish our younger generations were taught all this in schools.

Hope that will change because so much is lost if our own children do not know the truth and real history of our country, Kathy Streib. How will they know how lucky they are/were that America is/was the best country in the world?

This is a timely entry to this months challenge to recognize those who gave themselves for our freedom.   Frederick, Md  has Memorial Park and it is the only park in Maryland that commemorates soldiers from every American war from the French and Indian War to the Gulf Wars and garnered national attention due to a Ten Commandments monument.

That is a nice-looking memorial and seems like a wonderful place to sit and enjoy the nice weather!

One day, I'd like to visit that park, Buzz Mackintosh. My brother and I have been to the World War II Memorial and to the Vietnam Veterans Memorial Wall and found family members carved into the stone. It was very emotional and healing at the same time.

I am glad the Ten Commandment Monuments still stand!

A lot of thought went into creating it and am glad our community came together to make it a reality, Brian England. It is beautiful!

Hello Wanda Kubat-Nerdin - Wanda Can! .  You have captured beautifully the special setting for an honored monument.  Thank you.  Mark

Am glad that more cities are bringing the Gold Star Monument in as an honorable tribute to, and reminder of those who gave their all of The Untied States of America, Mark Don McInnes, Sandpoint-Idaho. Thanks again for hosting!

Wanda Kubat-Nerdin - Wanda Can! - I am commenting on a fairly new Federal Holiday. My only wish is that there was a Gold Star Memorial National Holiday for those families who truly deserve the honor. The monument is absolutely superb. I can't imagine how your Aunt coped with the loss of her husband and son as a double recipient. Many tears continue to flow for Gold Star Families.

My heart still feels the loss of my cousin, no wife or children, the last to carry on his family name. aHe came back in a flag draped wooden box. Yes, tears still flow for the fallen, Patricia Feager, MBA, CRS, GRI,MRP!

Younger generations are not taught about the sacrifices of yesterday's heroes that gave their all, so they assume everything is FREE!

Wanda Kubat-Nerdin - Wanda Can! - When I was a kid our family always went to my Aunt & Uncle's cottage. My Aunt was my mother's sister. During the summer, all the cousins and second cousins got together for weeks on end. My second cousin was one of the first to go to war in Vietnam in the early 1960's and I know how heavy the heart can be when they are so young and will never come back.

To come back in a "flag draped wooden box," is so sad. Family memories like that stay with you forever and the heart is changed. You are right about younger generations. They know so little about our American history. I went to Barnes & Noble Book Store a few days ago and went to the children's section. I took a peak at some of the new history story books on their shelves and had leave. I was sick to see what publishers are selling.