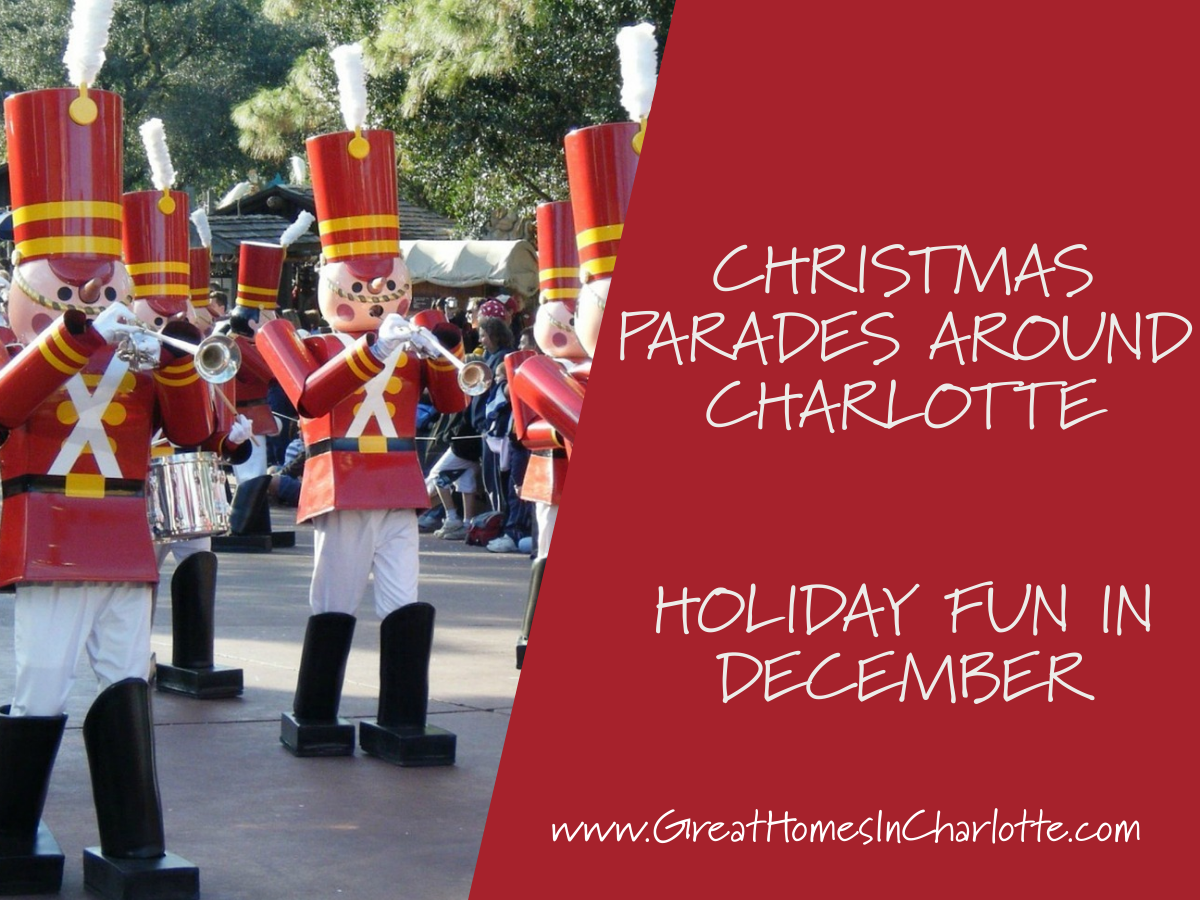 Who doesn't love a good parade? Especially at Christmas time? The Greater Charlotte area certainly loves its holiday parades. Here's a list of six of the most popular parades to enjoy this December. Waxhaw's Christmas Parade will be held on Sunday, December 11th at 3:00 PM in downtown Waxhaw. The parade, whose 2022 theme is "Merry & Bright," will feature local school marching bands, entries and floats by 70 businesses and members of the community. You can also expect an appearance from a very special guest from the North Pole!  Click here for the Waxhaw Christmas Parade route. Indian Land's Christmas Parade will be held on Saturday, December 10th from 5:00 PM till 6:30 PM at the Indian Land Middle School located at 8063 River Road. The parade is followed by carols and a tree lighting ceremony.

Lake Wylie's Annual Lights On The Boat Parade will be held on Saturday, December 10th from 6:30 PM till 7:30 PM at Papa Doc's Shore Club located at 3990 Charlotte Highway in Lake Wylie. Lake Wylie's holiday boat parade has been going on for 33 years... come out and enjoy the beautifully decorated boats.

Lake Norman's Lighted Boat Parade will be held on Saturday, December 17th at 5:30 PM till 7:00 PM. The parade starts at Blythe Landing,  goes to Ramsey Creek Park, and then to the Duke Energy Explorium. Each of the parks will be open until 30 minutes after the parade has passed each location. At Duke Energy Explorium there will be food trucks. Please bring unwrapped toys as a donation to Little Smiles. The Kannapolis Christmas Parade will be held on Saturday, December 10th at 6:00 PM till 7:30  PM in downtown Kannapolis. The nighttime parade will travel through the streets of downtown Kannapolis. After the parade, come out to Village Park at 700 West C Street and enjoy the 250,000 beautiful lights and displays, as well as local crafts and artisans, smore's around the fire pit, and food trucks Enjoy a ride on the Village Carousel featuring some 1,800 lights.  Click here for more information about Christmas festivities in Kannapolis.

Mount Holly's Electric Christmas Parade will be held on Friday, December 16th at 6:00 PM in historic, downtown Mount Holly. This year's theme is "A Festival of Lights."

How To Electrify Your Car For The Parade: Video

If you're considering purchasing or selling a home in the Greater Charlotte area this Christmas season or after the holidays, I'd  love an opportunity to earn your business, exceed your expectations, and to show you why experience matters and how:

Groups:
Posts to Localism
Waxhaw Rocks!
Welcome to my Neighborhood

Hi Nina - the holiday boat parade would be something to see.  A few of those parades happen in Florida.

I agree- who doesn't love a holiday parade? (Unless of course it happens to be below 30 with bitter cold winds)

Nina, you have won me over a long time ago, but now enough I will make visiting Charlotte a priority, not part of a wish list.  Thank you.  Mark

Hi Nina- I love parades and I know that everyone in your area will love knowing where they can find one in the Charlotte area.  This is one of the times I really miss Delray Beach and the Christmas boat parades.

Thank you, Roy, for popping by this Monday... trust your week is off to a great start.

ho ho ho my favorite Holiday! Nina Hollander, Broker  I bet those parades will be well attended. We also have a boat parade here in Cape Coral.

Will Hamm thanks, Will, as always for taking time to stop by. Wishing you a good week ahead.

Lise Howe hi Lise... fortunately, those are not temperatures we see here in Charlotte even in December!

Mark Don McInnes, Sandpoint-Idaho hi Mark... if you ever get down to Charlotte you know we'll be showing you a great time!

Kathy Streib hi Kathy... I remember your mentioning the Del Ray boat parade when you lived there... they are very popular (and colorful) here in Charlotte.

George Souto I'm with you on not loving to stand in the cold to watch a parade... fortunately it's not that cold in Charlotte. We think it's cold when it's 50 degrees! :)

Abby Stiller hi Abby... my favorite time of the year as well! I'm sure the Cape Coral boat parade is something to see.

Paul S. Henderson, REALTOR®, CRS good morning, Paul... Christmas is "big" in Charlotte area and it's one of the things I love so much about living here, since I'm also "big" on Christmas!

I love a good parade Nina Hollander, Broker . When I lived in a small town they had a parade for everything. It was fun and a good spirit booster for the community.

I think it was a good reminder to the towns people that "We are NOT insignificant".

Nina Hollander, Broker - I always wondered how they electrified personal cars during the holidays. Now I know! Although I am not going to do it for my car, I admire those that do. Parades are so much fun to watch but crowds are something I avoid.

Patricia Feager, MBA, CRS, GRI,MRP hi Patricia... I'm not big on crowds either, but having grown up in New York City watching many big parades I admit I'm a bit of a sucker for them.